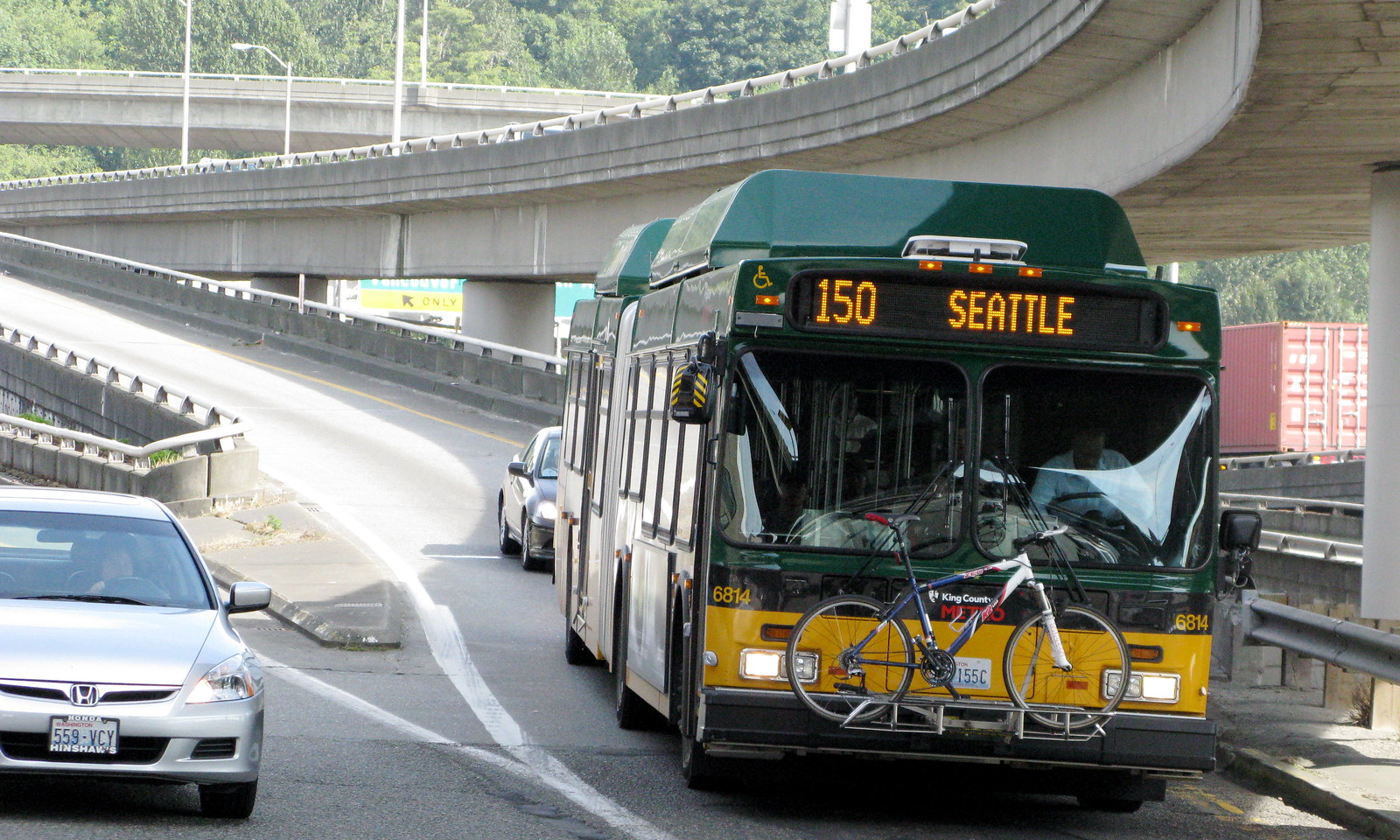 After an eventful 2020, Metro has been taking a look at how it prioritizes routes. As first reported by Stephen Fesler, On January 27th it briefed King County’s Mobility and Environment committee on its progress and revealed a bit about the staff’s thinking.

The current service guidelines describe how the third priority works: each corridor has a score based on the corridor’s ridership potential (“corridor productivity”, 50%), service to low income and minority neighborhoods (“social equity”, 25%), and connecting key nodes in the county (“geographic value”, 25%). The point total puts the corridor into one of four frequency levels. Metro invests in the list of routes that fall below these target levels, not in order of combined score, but instead first the highest geographic values, followed by the highest corridor productivities, and then the remainder that presumably had high social equity scores.

Finally, routes that carry lots of rides per hour and/or passenger-miles per mile get whatever new money remains.

This system is quite subtle, but broadly speaking routes with high residential and job density but lowish frequency are likely to dominate the list, but of those the ones in sparsely-served areas are likely to be boosted first.

As the staff memo describes, Metro staff is currently considering several changes to the third priority algorithm. There are some tweaks to the metrics I’m consigning to endnotes [1] because there are two that really stand out.

“Potentially changing the priority order of the geographic value, productivity, and equity scores (using different priority order would prioritize different areas of the county for additional transit service).” Taken with the Metro Connects change, these priorities are the whole game. After overcrowding and reliability problems are resolved, further investments would essentially be ranked in order of whichever score was priority one.

Enough analysis. Maps of the possibilities:

Geographic Value, as one would expect, prioritizes routes scattered about the County. Equity emphasizes areas south of Downtown Seattle, and productivity is heavily focused where the density is (Seattle). See more of these maps here.

For what it’s worth, Metro’s “preferred alternative” is the second one from the left (Equity, Productivity, Geographic Value).

This will also move through the Regional Transit Committee before going to full council in July. Obviously, there will be many opportunities for public comment, but subtle changes in the criteria can have huge impacts that may be hard to follow and intelligently comment on.

It’s futile to argue about the relative merits of Geographic Value, Productivity, and Equity, as they go to the very heart of what transit is for. Is it a social service for the poor? A tool to get as many cars off the road as possible? Or a service that should be available to everyone at some level? All three, of course. But the relative values are a deeply personal question.

The proposed weight of the Metro Connects network is both interesting and potentially dangerous. Funding a high-priority route to an aggressive 2025 or 2040 or 2050 service level will tend to focus investment in fewer corridors. If you’re a rail fan, that ought to excite you. On the other hand, there is a real risk of empty buses when current metrics say that today’s service levels are adequate.

[1] Here are the other four proposed changes:

“Broadening the definition of social equity from including race and income only to including race, income, disability, foreign-born, and limited English speaker.”

“Adding target service levels for weekend service to cost estimates.” This will presumably mean fewer routes get funding, but will make sure weekend service gets attention.

“Using population data (how many people live in an area) rather than boarding data (how many people ride a route).” This is how the productivity score already works, so by making the equity score work this way, it ought to increase the weight of low-income but car-intensive neighborhoods in South King County.