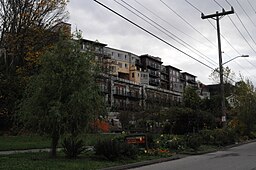 Heidi Groover takes a break from the scary ” home” price beat to point out that it isn’t all that hard to buy a condo in Seattle ($).

There is a lot of media directed at people shopping for single family homes, but the number of possible houses within a certain distance of Seattle is finite. It’s natural for a growing metropolitan area to have a center city where single family homes become rarer, and the only way out is to allow denser forms of housing. Despite shortcomings,, Groover’s reporting suggests policy is basically working to provide ownership opportunities.

More reporting like this, please. Single-family homes will be a less important part of the market, and statistics that reflect that will be critical to understanding how our policy mix is working.

93 Replies to “The future is condos”