Both Doug Trumm and Mike Lindblom ($) have already explained the very deep stations proposed along underground segments downtown quite thoroughly. But briefly: typically, the deepest stations in a system are among the lower-ridership ones (like Washington Park in Portland). Westlake, Midtown, and Chinatown would be among the deepest in North America but also among the busiest in the system. Stations this deep mostly depend on elevators, which limit throughput, have an (ahem) spotty maintenance record, and increase the length of every trip that uses the station.

Worse, there is no engineering reason for Chinatown to be deep. It’s a potential concession to a neighborhood that is tired of decades of disruptive construction projects nearby. There is also no appetite to cheaply and shallowly cut-and-cover 5th Avenue downtown for similar reasons. Hopefully, early media attention will help politicians stand up for future riders, and engineers to get a little more creative.

END_OF_DOCUMENT_TOKEN_TO_BE_REPLACED

The bus routes that are north of Seattle will change after Lynnwood Link. Several routes cross the county line, or should. These are operated by King County (Metro Transit) or Snohomish County (Community Transit). What follows is a proposal for changes to these routes. This is not meant to be a comprehensive list of bus routes that go across the border, but a few that would change because of Lynnwood Link.

You can see a full size map by clicking in the corner. You can highlight a route by selecting it on the legend or the map itself. I’ve tried to be as detailed as possible on the map, although errors are inevitable (please notify me of mistakes via the comments).

END_OF_DOCUMENT_TOKEN_TO_BE_REPLACED

As Sound Transit has done several times before, it is shutting down the 1 Line between SODO Station and Capitol Hill Station this weekend, for maintenance work.

Seattle’s new Mayor does not seem to be a fertile source of pro-housing legislation, having campaigned on skepticism about changing single family zones. But instead of struggling for dimes, we can pick up dollar bills at the state level. The bills are SB 5670 and HB 1782, and as explained by local treasure Dan Bertolet, would legalize:

Up to sixplexes on all residential lots within a half-mile of a major transit stop in cities with populations of 20,000 or more.

Up to fourplexes on all residential lots elsewhere in cities of 20,000 or more.

Duplexes on all residential lots in cities with populations of at least 10,000.

There are also substantial limits on parking minima, and some anti-displacement measures. Cities could skip these prescriptions and instead adopt city-wide density minima, but they would have to show this did not have disparate impacts — no putting all the growth in the “urban renewal” sectors and leaving the upscale places untouched.

END_OF_DOCUMENT_TOKEN_TO_BE_REPLACED

The 2022 legislative session is starting off with a bang this week. Before the first week is done Senate Bill 5528 will have a hearing in the transportation committee. The bill picks up where last year’s HB 1304 left off but expands the function to a regional level under the governance of Sound Transit.  A city, subarea, county, or combination thereof will have the option to create an “Enhanced Service Zone” to target the investments their voters care about most

SB 5528 allows the Sound Transit Board to give voters the opportunity to fund faster construction timelines on existing projects and/or fund new transit improvements and services for individual cities and sub-areas within the Sound Transit district.

What is possible is only limited by what the individual cities and their voters want. Some sample potential projects and Enhanced Service Zones:

END_OF_DOCUMENT_TOKEN_TO_BE_REPLACED 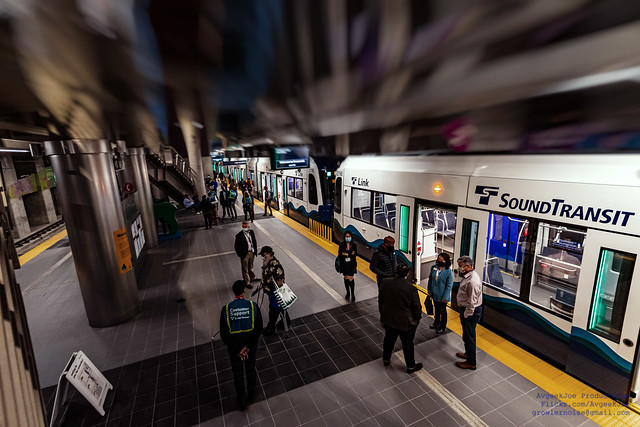 Sound Transit recently released a revised Link schedule that will take effect January 8th “to better reflect actual trip times.” The main difference is that a Northgate-Angle Lake trip turns out to be 4 minutes slower, from 53 minutes to 57.

There are four spots where it loses one of those minutes: Roosevelt-Northgate, UW-U District, Westlake-Capitol Hill, and Mt. Baker-Beacon Hill. No doubt, to some extent these particular segments are not the only source of delay, but just where it rounds up to full minutes.

This is actually a good news story: Columbia City-Capitol Hill will still be 21 minutes, 1 minutes less than the time pre-pandemic. I’d speculate it to be a function of recovering ridership, and the resulting frictions adding 7% to overall times. But ST’s John Gallagher says that the Northgate segment is a bit slower than expected, and on the older segments two more minutes makes it easier to stay on schedule and respect timed transfers.

No one is going to remember the Durkan administration, positively or negatively, based on its transit or land use legacy. The twin crises of the pandemic and a reckoning with racist policing will dominate the historical record. But here at STB, we always size up the outgoing mayor (Murray, McGinn, Nickels) on this basis. And her legacy will largely be stasis, with isolated progress and some major setbacks.

The preceding Murray administration had largely locked in a transportation agenda with a vehicle license fee for bus service, Move Seattle, and Sound Transit 3. A first Durkan term would therefore always have been one of consolidation. Ms. Durkan campaigned as a policy continuity candidate from a productive but scandal-ridden predecessor. On this measure, her term was a disappointment.