At 5 p.m. two Fridays ago I made the grave mistake a getting on a West Seattle bus at the 3rd & Pike Street stop.  See, I had to retrieve a child from summer camp by 6 p.m.  As the bus crawled along the Columbia Street and 1st Avenue South “temporary 2019” routing, the minutes ticked away rapidly, and at 5:52 p.m. the bus was reaching the 1st & Dearborn stop, still in downtown Seattle.

To routinely spend one hour traversing downtown Seattle is not functional bus service, full stop; especially in a City where more downtown workers arrive by bus than any other mode.  The Seattle DOT needs to significantly improve the transit pathway, or King County Metro needs to change the routing for Burien and West Seattle Metro bus routes that use Highway 99.

END_OF_DOCUMENT_TOKEN_TO_BE_REPLACED

An afternoon peak toll on certain streets leading to Interstate 5 entrances (Mercer, Yale, Olive and James) would reduce chronic congestion at key chokepoints and allow the street grid to work better for all users. Luckily, this approach is both legally and technically feasible for the City of Seattle.

Seattle was the fastest growing large city in the US in 2013, and South Lake Union has rapidly transformed from a low-rise warehouse district to a serious job center rivaling downtown.  Transportation capacity has not kept up.  Mercer Street has been a mess for decades, but now the Dexter disaster, the Westlake wrangle and the Amazon crush also snarl peak hour traffic and delay bus trips for dozens of minutes.  And construction in SLU isn’t finished yet: more buildings, workers and parking spots (!) are on the way.

Transportation planning usually focuses on the capacity of a single road, but the auto transport system is actually a complex network of linked components:

The conventional American traffic engineering solution is to increase the capacity of the limiting component.  In downtown Seattle and SLU, freeway capacity and particularly freeway onramp capacity are the bottlenecks in the network.  Downtown streets become gridlocked, not due to massive traffic volumes, but due to cars queuing to enter I-5.  The gridlock delays all road users in the area, including transit riders on routes unrelated to I-5, such as Metro Transit routes 26, 28, 40, 70, 8, 3 and 4 and the SLU streetcar.  But there will be no new I-5 onramps or traffic lanes on downtown streets: there is physically no room.  So is this congestion solvable?  Yes, but only through a different mindset.

A constrained traffic planning approach is to reduce the number of cars accessing I-5 from downtown, to match the capacity of the onramps and feeder streets.  Marginally reducing the number of cars queuing for I-5 access via a toll, at the right price, would allow the street network to work for everyone.

END_OF_DOCUMENT_TOKEN_TO_BE_REPLACED 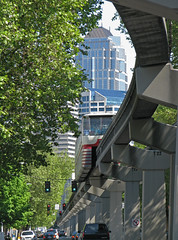 We shouldn’t lose sight of many ways King County Metro service has improved in the past several years.  It is easy to do so in the midst of the constant financial struggles, plans for service cuts and measures to shore up funding (Plans A, B, C and now D) that dominate the news lately.  This post catalogs 10 improvements that Metro has introduced over the past years – in case you are new or forgot how it used to be.

I began riding Metro buses around 15 years ago, and for many of those years catching a bus meant pulling out your trusty printed schedule, seeing when the next 30-minute frequency bus was scheduled, walking to the stop at the appropriate time, waiting 0 to 10 minutes for arrival (it was impossible to know when the bus would actually arrive), instinctively knowing whether to pay upon boarding (cash, paper ticket or flash pass ready) or later when exiting, after watching the surroundings carefully to know when I had arrived. Some people in some places still travel this way on transit, but Metro has provided lots of better options.

The top 10 Metro improvements begin after the jump.

END_OF_DOCUMENT_TOKEN_TO_BE_REPLACED

The Yes for Transit campaign in support of this November’s Seattle Transit Proposition No. 1 is holding two volunteer events this week.  The campaign kickoff event is on Wednesday from 5 to 7 p.m. at Fado Irish Pub and, for those who can’t attend, the Transportation Choices Coalition is hosting a campaign volunteer happy hour at their office today at 4:30 p.m.

David Lawson covered the funding measure here earlier, but in short, it will protect King County Metro bus routes in Seattle from proposed service cuts by raising an estimated $45 million per year.  The funding sources are the same as in the failed countywide proposition earlier this year: replace the expiring $20 CRC annual vehicle fee with a $60 vehicle fee and increase the sales tax rate by 0.1%.

At both events transit supporters can learn about the campaign, donate and sign up as a volunteer.  It may be exhausting to gear up for yet another campaign to save buses, but it is critical to avoid the devastating cuts Metro has planned for 2015.  Seattle-only transportation measures have failed with voters in the past, so advocates should not be overconfident.

There will be beverages to drink, appetizers to enjoy, and plans to be made to keep our transit system moving. And of course, invite your friends! Arriving at an unfamiliar airport, you see multitudes of signs directing you towards taxis, shuttles and public transit.  So many questions arise: Which should you take?  Do I have enough time to take transit?  The answers to these questions vary widely depending on the airport.  There is a lively and valuable debate over the priority, value and social equity of airport transit links.  However, this post is from the point of view of a traveler, ranking the transport options between the world’s 50 largest airports and their central city by comparing the best transit alternative to a taxi.  After traveling a fair amount in the past few years, I wanted to compare transit outcomes for travelers and identify the best practices. The total travel time required to use airport transit is compared to the uncongested midday travel time of a taxi.  Congested taxi travel times were used for some notoriously clogged cities, such as Jakarta and New York.   The transit time is based on a traveler arriving at the airport (the largest international terminal, to be precise) in midday, and waiting one-half the vehicle frequency for the next ride.  The same method is used to estimate time for any transfers, including any shuttles required to access the transit station.

Seattle offers Sound Transit Link light rail service between Sea-Tac Airport and downtown Seattle.  It performs in the middle of the pack (31st out of 50) on the transit time penalty, but much better on frequency (tied for 10th out of 50).  Link is in the ball park for light rail airport service, although a bit on the slow side compared to the taxi alternative.   Light rail and subway systems can offer much better frequencies than the other types of airport transit because they pool demand from a variety of high-demand, all-day sources.  As an extra bonus, although not accounted for in the rankings, a variety of destinations in the metro area can be reached as frequently from the airport as downtown.  Dedicated airport transit services, even at the largest airports, don’t generate sufficient ridership for sub-10 minute frequencies.  In that aspect, Seattle is blessed that its airport is along a natural corridor of transit demand.