An afternoon peak toll on certain streets leading to Interstate 5 entrances (Mercer, Yale, Olive and James) would reduce chronic congestion at key chokepoints and allow the street grid to work better for all users. Luckily, this approach is both legally and technically feasible for the City of Seattle.

Seattle was the fastest growing large city in the US in 2013, and South Lake Union has rapidly transformed from a low-rise warehouse district to a serious job center rivaling downtown.  Transportation capacity has not kept up.  Mercer Street has been a mess for decades, but now the Dexter disaster, the Westlake wrangle and the Amazon crush also snarl peak hour traffic and delay bus trips for dozens of minutes.  And construction in SLU isn’t finished yet: more buildings, workers and parking spots (!) are on the way.

Transportation planning usually focuses on the capacity of a single road, but the auto transport system is actually a complex network of linked components: 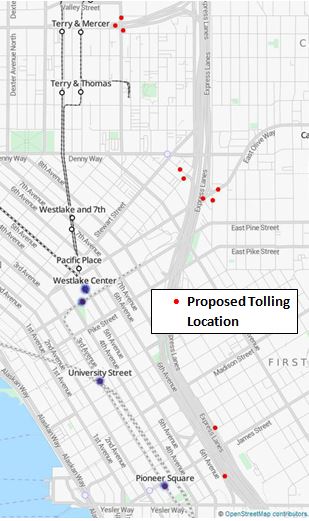 The conventional American traffic engineering solution is to increase the capacity of the limiting component.  In downtown Seattle and SLU, freeway capacity and particularly freeway onramp capacity are the bottlenecks in the network.  Downtown streets become gridlocked, not due to massive traffic volumes, but due to cars queuing to enter I-5.  The gridlock delays all road users in the area, including transit riders on routes unrelated to I-5, such as Metro Transit routes 26, 28, 40, 70, 8, 3 and 4 and the SLU streetcar.  But there will be no new I-5 onramps or traffic lanes on downtown streets: there is physically no room.  So is this congestion solvable?  Yes, but only through a different mindset.

A constrained traffic planning approach is to reduce the number of cars accessing I-5 from downtown, to match the capacity of the onramps and feeder streets.  Marginally reducing the number of cars queuing for I-5 access via a toll, at the right price, would allow the street network to work for everyone.

An afternoon peak toll on certain entry points to I-5 (Mercer, Yale, Olive and James) would decongest downtown streets (red dots on the map).  Cities around the world, including Singapore, London and Stockholm, have employed decongestion tolling, also known as congestion charges, to reduce demand through bottlenecks and gridlocked areas.  Locally the SR 520 Evergreen Point Bridge is decongestion tolled (Good to Go), with variable rates throughout the day matched to demand.

Camera gantries would be mounted over specific lanes leading to I-5.  Unlike the Good to Go system, which uses car-mounted transponders for billing (with license plate recognition as a backup), the London and Stockholm systems rely on license plate recognition as the primary method to levy the fee.  Frequent users could load money into an online account which would be billed when their license plate passes a camera.  Infrequent users would simply receive a bill in the mail.  A camera system would be capable of tolling only vehicles in certain lanes (leading to I-5) and not adjacent lanes, which could be difficult for a transponder-based system.  The tolling system is technically feasible, and completely legal at the local level.

State law allows cities and counties to form Transportation Benefit Districts (TBDs) and levy specific taxes for transportation. TBDs explicitly may levy vehicle tolls given a public vote, although no districts in the state have yet used that power.  A TBD toll on state highways also requires legislative approval and WSDOT to operate the toll system.  But TBDs can also toll city or county roads unilaterally, except that the Washington State Transportation Commission must review and approve tolling proposals that may have a significant impact on state highways.  Commission approval is likely to be required for the proposal above.

Seattle formed a TBD in 2010 and council-manically passed a $20 annual vehicle license fee for city street maintenance.  This fall’s Proposition 1 for bus service authorized the Seattle TBD to levy an additional license fee and a 0.1% sales tax, used to purchase bus service hours from King County Metro.  A future ballot proposition could propose levying tolls on strategic traffic lanes leading to I-5, to provide congestion relief throughout downtown Seattle.