The Atlantic has a good piece about the decades-long decline of Syracuse, NY, – my home town – a small rust-belt city that shares, in outline, the history of many Northeast and Midwest cities. Robust growth from mid-late 19th to mid-late 20th centuries, founded on manufacturing and transportation, was followed by slow but continual economic decline as manufacturing businesses left or closed, and social dis-integration as many white, affluent families moved to suburbs. Syracuse University and a large health-care complex are the remaining symbols and a major engine of the still-troubled economy today. Gentrification has renewed just a couple of in-city neighborhoods, but many more are continuing to decline.

Interstate 81 was built through the city from north to south, 50 years ago, and its elevated stretch through downtown is near the end of its life. The city and state are deciding now whether to rebuild it, or alternatively NOT rebuild it, redevelop that area and allow the Interstate route to follow an existing suburban bypass (I-481, analogous to I-405).

The story is a good read, though the headline is needlessly crude: construction of the Interstate through the city made things worse, but that’s far from the whole story of the past 50 years. The article is much more nuanced and informative.

Jarrett Walker has an interesting and useful piece (already linked in a recent News Roundup) suggesting that anti-urban, anti-transit attitudes are often related to fundamental human characteristics that we should sympathize with – because we all share them. He highlights loss aversion, comfort with known procedures, and the desire to secure our homes. If you all don’t mind a personal story, I can add a bit to Walker’s point.

In the mid-1990’s, I had an ex-pat assignment in Amsterdam, and lived there with my family including school-age kids. This exposure showed me the value of a very livable “real” city, not least because my 12-year old was incredibly independent, largely as a result of excellent transit. Yet when we moved from Amsterdam to the Seattle area. we settled in low-density Mercer Island, hardly a city and a place with only mediocre transit service, even then.

Why would we have done such a thing? Because, like many parents, we took school quality to be the most important criterion. Affluent suburbs such as Mercer Island and Bellevue were – and perhaps still are – a safer choice for navigating kids through public schools, and metrics such test scores were more favorable there. Whether those metrics are “fair” or not becomes less important when making choices for your kids. Many parents have made the other choice – to live in Seattle and similar cities – and I’m sure their kids have done fine, but it was certainly a reasonable consideration, and one that still strongly influences many parents today.

I’d guess that parents’ concern for their kids’ security and environment has much to do with the backlash against HALA’s proposals. Some of the same folks who are strongly for bike- and walk- friendly neighborhoods also are unhappy about the possibility of denser development in their neighborhoods – and both motivated by parental concern.

Many expressions of those concerns are misguided, in my opinion. But the details are not easy, and dismissive arguments will only harden positions.

One final observation about Amsterdam: in the Netherlands, publicly-financed elementary and high-school education is an interesting historical hybrid of public, private, and religious schools, with more choice than most places in the U.S. (and transit is full of commuting students). As a result, location has much less impact on access to (perceived) high-quality education, and so there has been less pressure for affluent parents to self-segregate in affluent suburbs – such as Mercer Island.

(The author has contributed to the I-732 campaign but has no other affiliation with it.)

Initiative 732 would establish a tax on fossil fuels consumed in Washington State, ramping up over 2 years to the equivalent of $25/ton of carbon emissions, and then increasing by 3.5%/year (plus inflation). The revenue would be used to reduce the state sales tax , eliminate the B&O tax for manufacturing, and provide sales-tax rebates to low-income working families.
The I-732 campaign is currently collecting signatures to place the initiative on the November ballot. Further details are available at http://carbonwa.org

Why a revenue-neutral carbon tax?

Most transit advocates are also carbon-reduction advocates, and likely favor some sort of carbon pricing. But why-revenue neutral? Why not designate the proceeds for transit funding and perhaps other climate-friendly government spending?
First and foremost, it is critical to gain consensus in favor of carbon reduction. Without very strong and broad popular support, carbon pricing legislation will fail in the face of spending by fossil-fuel industries and their focus on anti-tax messaging that (whatever your opinion of it) is popular with a large segment of voters. Many moderate and even some conservative voters recognize the dangers of climate change and would favor some climate action. But they are not likely to be urbanists, passionate about transit, nor friendly to increased taxes. Still, we are all agreed on the importance of carbon reduction, and a proposal that focuses on that single objective can gain the necessary consensus across progressive, many moderate, and some conservative voters.

What is the goal?

To insist on bundling carbon pricing with other progressive causes endangers that consensus. We have a choice: insist on the entirety of our individual agendas, or find common ground with enough voters to succeed on this critical issue. A revenue-neutral carbon tax provides that common ground.
And once we DO succeed, then we can continue the important debates about further aspects of land use, transportation, and equity. 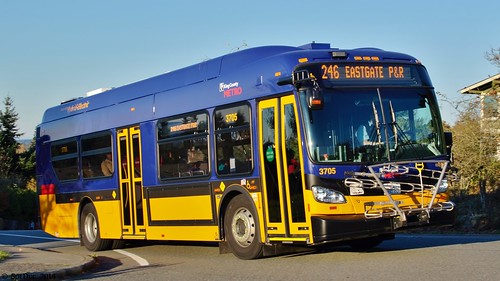 On Thursday the King County Council’s Budget and Fiscal Management Committee unanimously approved a 2015-16 budget ordinance that “maintains current levels of transit services.” The Council will formally take up the proposed budget in its scheduled meeting on Monday, November 17.  As all 9 council members serve on the Budget committee and voted to approve, approval is likely in the Council itself on Monday.

The Ordinance itself does not include a revised Financial Plan for Metro that reflects its provisions, nor the impact on the Revenue Stabilization Reserve. But for those interested, this report by Council staff  evaluates financial plan scenarios of different service levels, reserve policies, and economic forecast assumptions. In that document, Scenario 3 seems to correspond to the recommended budget, and Scenario 4 evaluates that plan in the case of a “moderate recession.”

Following my post regarding Metro service cuts and Kevin Desmond’s reply, Mr. Desmond very generously added some key details of financial projections, made time for a phone conversation, and then later commented on a draft of this article. Though I am grateful for Mr. Desmond’s time and help, I believe the details provided are actually strong evidence that the cuts are much greater than required, and that cuts can safely be postponed until a recession is apparent. Below I’ll review the financial projections and their implications, and then show Mr. Desmond’s response and other comments.

Background: Metro (and the county Executive) have proposed a financial plan that includes 250K annual hours of service cuts, introduced in 2015 and 2016, and funds a Revenue Stabilization Reserve (RSR) at a level intended to avoid further cuts in the case of a “moderate recession.” Others believe that the cuts may not be required, might be smaller, or could be deferred until the need is clearer.

About the financial projections based on a moderate recession, Desmond noted that the proposed reserve funding was not intended to handle another major recession such as started in 2008, but rather a more typical and frequent “moderate” recession. His office provided the following results of modeling based on a “moderate” recession (amounts are $M), compared with the OEFA forecast that assumes no recessions:

*The RSR balances in this table sometimes exceed Metro’s proposed target level of 50% of annual Sales Tax revenue. In the County Executive’s proposed budget, the excess (if any) is included in the Ending Undesignated Fund Balance. At the end of the 2019-20 biennium, this amount is $170M. The excess would be available for service growth.

**A negative balance indicate the added amount needed so that other fund balance targets would still be met.

END_OF_DOCUMENT_TOKEN_TO_BE_REPLACED

Generally speaking, there are two important questions to answer: (1) is the current service level (annual service hours) sustainable in the long term?, and (2) is there sufficient reserve to respond to un-anticipated, shorter-term dips in revenue? If current service IS long-term sustainable, it seems unfortunate to cut service levels in order to sort out reserves.

In any event, I think it might be useful to take a look at the numbers.  I reviewed the most recent Metro proposed financial plan (see p. 776 of this download, reproduced below) and estimated what the plan would be without the proposed 2015-16 service cuts.

The results suggest that the cuts are NOT necessary.  Even without the cuts and with an unusually large capital spending program in 2015-16, Metro’s overall reserves would increase from now to the end of 2020.  So Metro looks to be long-term sustainable with current service levels.

On the other hand, the Council and Executive DO face the task of developing a policy for the RSR – what fraction of a year’s operating expense should it have? – and sorting out how to achieve and maintain that level.

END_OF_DOCUMENT_TOKEN_TO_BE_REPLACED

Earlier this week I posted a quick analysis of Metro’s proposed financial plan, and concluded that the proposed 2015-16 cuts are not necessary. Some very apropos comments focused on the impact of another recession, which of course is inevitable, at some time and with some severity. Metro’s budget proposal mentions but does not detail an analysis based on “a moderate recession…after 2018.”

In the absence of Metro’s details,  I’ve added a simple model of a recession: starting in 2018, sale-tax revenue is 7.5% below forecast. In 2019-20, growth resumes as before, but from the “new” baseline – so those sales-tax revenues are ALSO reduced by 7.5% from forecast.

Why 7.5%? The Great Recession of 2008-9 reduced sales-tax receipts by 15%, before growth resumed. Half of that impact seems like a reasonable “moderate” recession.

Yes, this is speculative, and Metro (and others) may have more authoritative and solid analysis. It would be really good to have that, with the numbers.

Similar to the previous post, here are Cash Flow and Reserve amounts, now with a case added without service cuts, but with the “moderate recession” in 2018.

As it turns out, Mr. Dembowski’s suggestion to reduce RFRF to 20% of anticipated capital spending helps a little, but not dramatically. If the amount of reduction were applied to the RSR:

Transit users and STB readers use – and like to use – route maps. Routes are tangible, and are how we think when we actually use transit. This post uses some geographic analysis – focused on population and walking access – to show more of the big picture.

In April Metro recommended several phases of service cuts, for a total of about 16% of current service hours, corresponding to the estimated shortfall revenue following the defeat of county Proposition 1. It estimated loss of existing riders (10.8M rides – about 10%). This is indeed a key metric but I’ve not found quantitative answers to another seemingly basic question: what effect would the full set of recommended Metro cuts have on residents’ access to service (measured by 1/4-mile walking distance to service stops)?

Translating this information to population impact for Seattle (county-wide to come soon):

On these results, Metro’s planning, following the Service Guidelines, looks to be quite effective, including restructures that increase the population that can be served with limited revenue.