Work has begun on SR 522 BRT, with the first BAT lanes in Bothell coming online in late 2020, and Sound Transit’s Stride BRT service opening in 2024. Although phase 1 design recently concluded and the project is now entering the Conceptual Engineering and Environmental process, planners continue to evaluate how to serve the low-ridership Woodinville segment.

The BRT extends from the Shoreline Link rail station along NE 145th where Sound Transit will add bus queue bypasses and signal priority for transit at key intersections. On SR 522, the patchwork of existing BAT (business access & transit) lanes will be filled in to create an uninterrupted lane for transit from 145th to Bothell. In Bothell, the BRT is likely to operate on downtown streets, serving UW Bothell and connecting to I-405 BRT at NE 195th St.

Beyond that, there is a 3.5-mile segment to the Woodinville Park & Ride where the planned service is more basic. The ST3 plan does not fund any capital improvements east of I-405 and the buses operate in general purpose freeway lanes on I-405 and SR 522. The 10-minute headways west of I-405 drop to every 20 minutes into Woodinville.

END_OF_DOCUMENT_TOKEN_TO_BE_REPLACED

After Sound Transit released the draft system plan in March, some Eastside cities were unhappy it included a smaller investment in I-405 BRT than they had sought. Bellevue and Renton pushed for something closer to the “intensive capital” BRT with more parking and more stations using express toll lanes.

Some Eastside cities penned a joint letter, describing the proposal as comparable to ST Express service with improved headways, and demanding a much larger investment with more inline stops to create a BRT that is “the equivalent of light rail on rubber tires”. The attempt to forge a coalition of the I-405 corridor cities fell flat. Several East and South King cities did not sign. Some who signed were small cities that do not border I-405. None of the Snohomish County cities participated.

The amended system plan made some concessions. Sound Transit had agreed in March to relocate Renton’s downtown transit center to a more freeway-accessible location with 700 parking stalls. Renton pushed to expand the new South Renton transit center to accommodate 2,000 cars, and to add a second BRT stop at NE 44th St with parking for another 700. While the Board agreed only to 200 parking stalls in a surface lot at NE 44th St, the added center-line direct access facility adds $170 million to the cost of the BRT. An even more remote station with expanded parking at SE 112th in Bellevue was not included. Kirkland, taking a different approach, negotiated for more TOD in Kingsgate, reducing by 200 the planned parking expansion there.

I-405 BRT had lots of institutional momentum. The master plan for I-405, approved in 2002, envisions a BRT line with inline stations along I-405. To this end, Sound Transit has built transit centers and center ramps to the HOV lanes. WSDoT has created the express toll lanes north of Bellevue where buses could move reliably. With WSDoT now funded to extend the express lanes to the south, many observers expected a large investment in BRT on the corridor in ST3.

The plan ran up against uncomfortably low ridership numbers. Modelling suggests only 12,000 riders in 2040, and that the ridership isn’t increased at higher investment levels. A pared-down BRT, much of which runs in general traffic lanes, attracts as many riders as the ‘Cadillac’ version.

Recognizing that the proposal for higher investment levels didn’t stand up to close scrutiny, the Sound Transit Board in March advanced a draft system plan with just $735 million in capital investments, less than any of the options considered in the 2014 corridor studies. The low capital plan leveraged existing highway infrastructure with better and more frequent buses. Where center stations already exist, the BRT would run in the ETL lanes. Elsewhere, buses would run in general purpose lanes (or on the shoulder in a few locations north of Bothell).

END_OF_DOCUMENT_TOKEN_TO_BE_REPLACED

This summary of ST3 feedback from East King County (including North King other than Seattle) is the fifth in a series of ST3 feedback summaries. See our previous coverage of Pierce County, Seattle, South King County, and Snohomish County. A future installment will look at other Stakeholder Organizations.

The Eastside’s ST3 input is well coordinated. As happened last July, several Eastside cities signed a joint letter describing shared goals. Cities along the SR 522 corridor also submitted their own joint letter endorsing BRT on SR 522 and NE 145th St. Read together with the cities own letters, there’s an impressive consensus about what an Eastside ST3 package needs to look like.

Joint Letter of the Eastside Cities

The Eastside cities introduce their priorities by noting how they are “reshaping our regional growth centers and downtowns into dense, mixed-use, urban centers that need frequent and reliable transit service to sustain economic growth and viability. ST3 has the potential to create transit connections within the Eastside, and provide connections between the Eastside and the rest of the region”. The letter goes on to remind the Board that “the Eastside will be making a significant tax investment into the package” and looks forward to seeing commensurate investments back into the Eastside.

The Eastside’s five priorities in ST3 are:

END_OF_DOCUMENT_TOKEN_TO_BE_REPLACED

There has long been a regional consensus that I-405 Bus Rapid Transit would be a part of the ST3 program. But that general agreement has hidden a fuzziness about the form it would take. The December 4 workshop saw a range of options presented. The studies make a compelling case for a low-cost version of I-405 BRT, but complicate the case for doing much more. The eye-popping conclusion is that a range of investment levels between $340 million and $2.3 billion all produce the same ridership.

Staff presented “low capital” and “intensive capital” representative models. In between are a long list of a la carte options. There are two alternatives for a southern terminus; one at Angle Lake, the other at Burien TC. The “low capital” model leans heavily on existing infrastructure, and is less ambitious than any of the options examined in the previous set of studies in 2014.

Staff analysis helpfully breaks out cost and performance by segment. Segment A, Lynnwood TC to Bellevue TC, is the most productive with up to 10,000 riders, about 60% of all the ridership on the BRT. 10 of the 19 miles are served via general purpose lanes on I-5 and I-405 (other than limited shoulder-running southbound on I-405). Only the portion between Brickyard and Bellevue can be served via HOT lanes. Segment B, Bellevue to Renton, runs entirely in HOT lanes, but achieves fewer than 1,500 riders. That would include a deferred project to build HOV direct access ramps at N 8th St in Renton.

The total capital cost under $350 million is modest for the ridership, mostly because the highway infrastructure is largely existing or funded through WSDOT. 28% of the cost is for parking. 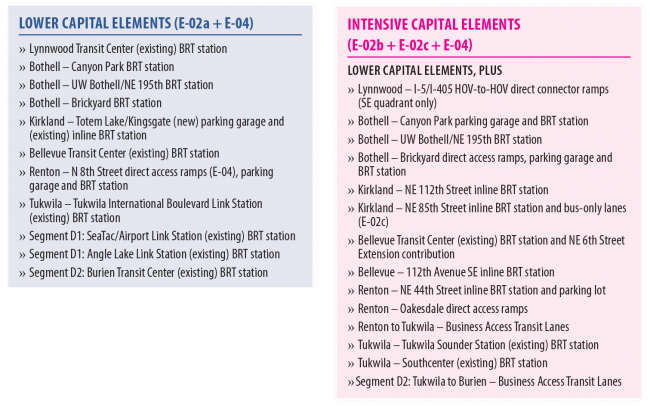 The ‘intensive capital’ option adds several stations and upgrades others. It eliminates much of the interaction with general purpose lanes via added ramps in the north and BAT lanes in the south.