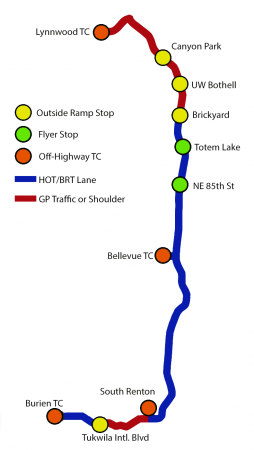 When Sound Transit released studies of I-405 BRT in December, many observers were surprised to observe the “intensive-capital” option produced no more ridership than the minimalist “low-capital” alternative despite a gap of up to $2 billion in capital investments. While some questioned the results, it greatly complicated the case for making a large investment in I-405.

The Eastside cities asked for a hybrid between the low and intensive capital alternatives. The scope, they argued, needs to “provide sufficient access for the line to operate as an efficient BRT facility” including a dedicated transitway with inline flyer stops, an additional station south of I-90, direct access to Tukwila Sounder Station, and an inline station at NE 85th Street in Kirkland.

They may be disappointed by the less ambitious proposal in the draft plan. The capital cost is $735m. Essentially, this buys the December “low-capital” proposal, plus a flyer stop at NE 85th St, and some modifications south of Renton that didn’t appreciably impact the total cost. Ridership estimates, previously pegged at 13-18K, are reduced to just 11-13K. Total travel time end-to-end is 87 minutes, 13 minutes faster than the comparable December estimate, probably because the BRT no longer goes to downtown Renton.

Ten stations are served, of which eight are existing Regional Express stops. One of the new stations is in South Renton, where Sound Transit accepted Renton’s request to relocate the downtown transit center to a more freeway-accessible location at Rainier Avenue South and Grady Way. Renton gives up a deferred project to build HOV ramps at N 8th St. Renton will get the parking garage it sought, though the 700 proposed stalls are fewer than their suggestion of a structure that would accommodate up to 2,000 cars.

Kirkland will have a flyer stop at NE 85th St, along with bus-only lanes between I-405 and 6th St. Those lanes are less complete than the 3rd St to NE 132nd Ave lanes previously suggested, with uncertain impacts to the reliability of connecting Metro service (still unclear in any case). At $305m, the NE 85th Station is by far the most expensive element of the BRT (over 40% of the capital cost of the entire project). Absent the more obvious access to central Kirkland via rail or BRT on the Eastside Rail Corridor, the NE 85th stop is the last remaining option to get close to downtown Kirkland. At the eight existing stations, investments are mostly modest, typically comprising facility upgrades such as signage, lighting, shelter, off-board fare payment, and real-time bus arrival. In Totem Lake, a 1,000 stall parking structure is proposed at Kingsgate P&R (for a net addition of 800 spots).

The BRT will run in general-purpose lanes on I-5 and on I-405 north of Brickyard, with some shoulder-running southbound in the Bothell area. After Brickyard, the BRT runs in the HOT lanes to the Renton TC. Because of the newly introduced transit center and cancelled HOV ramp at N 8th St, it is no longer proposed to use HOT lanes south of Renton. Instead, the BRT will run in general purpose lanes on I-405 and SR 518 to Tukwila International Boulevard Link Station, and continue on new BRT-only lanes along SR 518 to Burien.

Just two years ago, the corridor studies for I-405 BRT considered “phased” and “full buildout” options, priced at $900m – $1.7B. Once ambitious goals for I-405 BRT have been gradually worn down by weak ridership projections and competing priorities. Eastside leaders are unimpressed by the design compromises. Bellevue staff characterize it as “only slightly better than current Regional Express (REX) Route 535 bus service in the segment north of Kirkland” and are also concerned about limited stops between Kirkland and Renton. However, many of the investments for a higher-grade BRT would be in Snohomish County, already severely constrained by competing priorities.

Relative to current ST Express service, the BRT design optimizes for speed and reliability over access. The BRT will skip several of the stops off the highway that are served by ST Express routes. Plans for connecting local service by Community Transit and Metro are not yet worked out.

In the 2014 corridor study, Sound Transit considered a set of overlapping “trunk-and-branch” routes that would reach into nearby urban areas, increasing ridership by 20-25%, but at some operational cost and reliability penalty. An earlier WSDOT study in 2005 suggested a 55% ridership benefit. The ‘single-route’ model means access from places not immediately adjacent to the highway will be in the hands of local agencies, and could increase reliance on auto-access.

73 Replies to “Reduced Expectations for I-405 BRT”