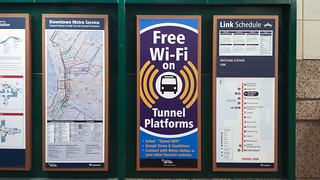 The DSTT is no longer an area devoid of communications. In case you haven’t noticed, there’s now a somewhat suspicious-sounding but completely legitimate “Tunnel WiFi” available at all five DSTT stations (but not in the tubes between stations). Launched by King County on March 9, it was promoted so riders could start planning for route changes. King County will continue to maintain it after ST turns on cell coverage but is not planned to be extended in to the tubes.

The plan is still to have the cell service up and running in the tunnels and stations from UW to downtown by the end of this summer, then in the DSTT this fall and in the Beacon Hill station and tunnels early next year.

4 Replies to “Tunnel WiFi is here to stay”