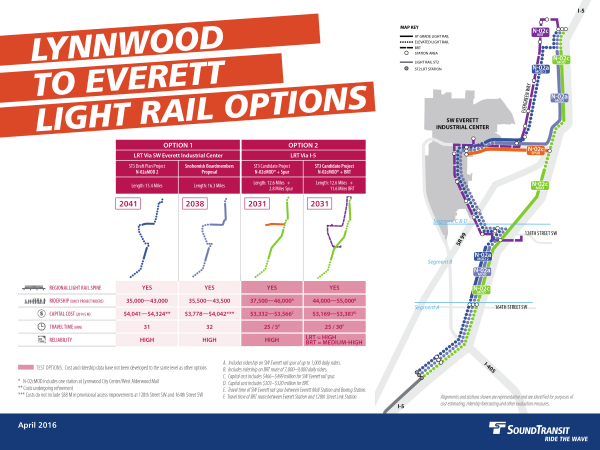 On Monday night, Sound Transit held an open house at Everett Station regarding its plans for Snohomish County in ST3, mainly focusing on the light rail extension from Lynnwood to Everett via Paine Field. Over the last month, much had been said over the disapproval of county residents and politicians over the proposed 2041 delivery date for light rail to reach Downtown Everett, with county leaders coming up with alternative proposals that sought to preserve service to Paine Field at the expense of any rail on Evergreen Way. ST presented its new solution to the Paine Field problem, building a spur and keeping the main line on Interstate 5 for a decade-faster delivery in 2031 at a lower cost and faster route. A spur, either a short rail line along the Boeing Freeway towards Boeing’s Everett factory or bus rapid transit between Everett Station and Mariner Park & Ride via Evergreen Way and Airport Road (both part of Community Transit’s Swift BRT network, the latter coming online in 2018).

The spur would cost in the range of $320 million (for 11.6 miles of BRT) to $500 million (for 2.8 miles of rail), bringing down the cost of the entire line from $4 billion to only $3.5 billion at most, which would help with the Snohomish subarea’s ability to fund the project without inter-subarea loans. Travel times between Downtown Everett and Lynnwood Transit Center would also be reduced by 7 minutes from 32 under the Paine Field option to 25; riding the rail spur would add 5 minutes of travel time and a few minutes for a transfer at the Everett Mall, adding a small amount of time for Boeing-bound riders. The distance between Lynnwood and Everett would be reduced from the proposed 15-16 miles to only 12.6, saving riders 50 cents per round-trip under the current light rail fare formula. Total ridership would increase under either of the Paine Spur options well into the 40,000 range if not higher when including the two spurs, with the slower and longer BRT option netting 7,000 to 9,000 daily riders and the light rail spur only 1,000.

Turnout at the Everett meeting was high enough for Sound Transit staff to use their prepared overflow room, just down the hall from the main meeting space on the fourth floor of Everett Station. A dozen or so local politicians were on hand to make speeches and have their opinions be heard, including representatives from cities outside of the Sound Transit district such as Marysville, Lake Stevens, and Stanwood. Many in attendance were wearing t-shirts distributed by the Light Rail to Everett group, funded by the Economic Alliance Snohomish County, reading “Light rail to Everett…in our lifetime”; the group’s official position is similar to that of the Snohomish County politicians on the Sound Transit Board, who want both sooner delivery of light rail as well as service to Paine Field’s employment center. The question-and-answer session was handled at a much faster pace than a previous session I observed at the similarly-contentious Ballard meeting, though it did continue well past the scheduled end point as people were happy to stay and listen for longer as a majority of those wanting questions answered were heard. ST CEO Peter Rogoff seemed eager to inject a healthy amount of his humor into his responses to various questions that would have been better left unanswered for their irrelevance. With the exception of an attempted filibustering from an anti-rail speaker, who had his microphone rescinded by staffers, questions touched on concerns ranging from the upcoming Tim Eyman initiative and its possible effects to ST’s plans, to possible annexation and extension of Sounder and Sound Transit Express to Marysville and Smokey Point (where the former would be time-competitive with existing peak express service).

At the end of the night, many in attendance seem to come away satisfied with the new proposals and their timeliness as well as their preservation of Paine Field service. While the lack of any rail options on Evergreen Way may disappoint those who push for TOD in Snohomish County, an Interstate 5 alignment (with Paine Field spurs) is ultimately the lesser of two evils and would be wholly acceptable and palatable to all parties in Snohomish County, from commuters to businesses and leaders.