Walkscore has a new gadget to play with.  I’m pretty sure Link isn’t included, however. 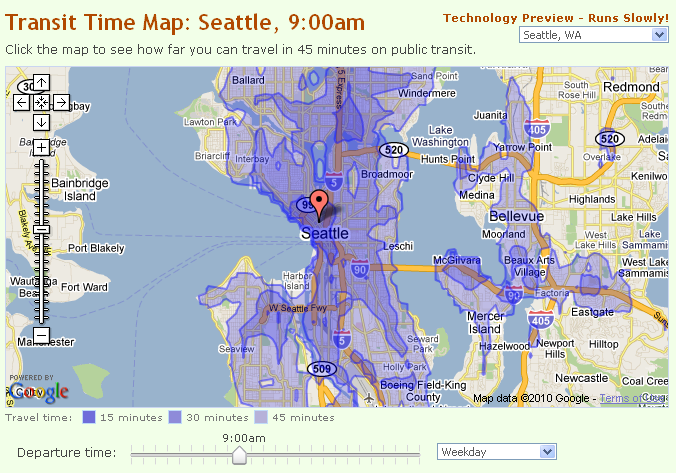 Publicola’s Dan Bertolet, with the quote of the year so far:

Why has been such a struggle to make these things happen? For example, how can it be that in a state that has committed to a goal of reducing vehicle miles traveled by 50 percent by 2050, leaders are strong-arming no fewer than three multi-billion dollar car infrastructure mega-projects, when at the same time transit funding [is] perenially on the chopping block, and ped/bike plans can’t be implemented due to lack of funds?

I really wish I’d found this prior to my two-parter on MLK signals:

Literally, twice. No one was seriously injured.

This was a very big news week for bikes. This is an open thread.

[UPDATE: A few points I should have made yesterday:

Sportswriter Joe Posnanski, a national treasure, does some deep thinking:

How long do you think the Yellow Brick Road was on the ballot before the people Of Oz and Munchkin Land actually voted for it? And, even more to the point, WHY did they vote for it? How in the world did THAT bond get passed? One, that road had to be ridiculously expensive to build. Yellow brick all the way from Oz to Munchkin Land? That’s really wasteful.

Second, was there even a need for this road? I would have to assume to that the Oz Anti-Tax groups opposed it. And those groups were right. Think about it: does Dorothy pass a single person the entire way to Oz? Even one? No. Not one person on a bicycle. From what I can tell, not one person commutes from Munchkin Land to Oz. Dorothy is passing scarecrows and rusted tin men and talking lions. But not another soul. There is absolutely no need for that road. And it certainly did not have to be made of yellow brick.

Third, what about loss of life in the road’s construction? The human cost. The feeling seems to be that about that about 20,000 people died building the Transcontinental Railroad. And that wasn’t opposed by two fairly violent witches, crazed monkeys and guards under a wicked spell. Plus the railroad had to wind through woods with lions, tigers, bears (oh my) and very angry trees who throw apples about as hard as Brian Bannister.

All in all, I think the Yellow Brick Road is the most wasteful and pointless public works projects ever.

This is somewhat paraphrased, but overheard on the Senate floor from Senate Transportation Chair Mary Margaret Haugen: “There is no one on the floor of this senate that has done more for transit than I have.”

I’m going to let this be an open thread tonight.

[UPDATE from Martin: This post has long been scheduled, and has nothing to do with yesterday’s earthquake. It is a freakish coincidence.]

Clarence Eckerson of Streetfilms was in Seattle recently, and this is the first of a series of videos he’s making about his visit:

We’ll be sure to share the rest of them as they come out.