On behalf of the Seattle Transit Blog (STB), I would like to welcome the American Planning Association to Seattle for its four day national planning conference. STB has covered transportation and land use policy in the Puget Sound region since 2007, becoming a recognized source of transportation reporting and advocacy. Written by a group of passionate advocates, we dive deep beyond the headlines.

To help APA attendees from across the country get oriented in our fine city I’ve pulled together a topical compilation of posts and links which will help you get up to speed on the what’s happening in Seattle. If you want information about getting around the city check out Seattle for visitors or consider using our bike share system called Pronto! If you have questions leave a comment and our awesome readers will help answer your questions.

This Tuesday March 31st, Metro will launch its first long range planning effort in a very long time with an exciting two-part event at the Downtown Seattle Central Library. The event, which starts at 6:00 pm, will begin with six facilitated break-out sessions that will dive into key topics.  Each break-out sessions will be lead by subject area experts from a variety of organizations and include:

The discussion from each break-out sessions will then be used to identify common themes and the overall vision of where participants want Metro to be in 25 years. If you care about the big picture vision of transit in King County this event is a must.

Once break-out sessions have wrapped up the event will transition directly into the panel discussion guided by the themes and vision generated in the break-out sessions. Panelist include Jarrett Walker (transit planner extraordinaire), Rebecca Saldaña (Executive Director of Puget Sound Sage) and Mark Hallenbeck (UW transportation researcher and BIG picture thinker). This discussion will be moderated by Rita Brogan of the Washington State Transportation Commission.

This promises to be a unique, blue-sky type of event that only happens a few times a year and I would strongly encourage those who are interested to attend. More details are available here.

Last week, Mayor Murray launched the City of Seattle Vision Zero Plan, adding Seattle to a fast-growing list of US cities that have committed to reducing preventable road fatalities to zero. The plan, which was covered here, here and here outlines a variety of near-term actions the City will take to eliminate road deaths and serious injuries by 2030.

Seattle’s Vision Zero Plan is an excellent starting point. It identifies high-value, near-term actions the City can take now to improve road safety, especially for pedestrians and cyclists, who are the most vulnerable road users. Unfortunately, the level of detail identified by the plan for road improvements didn’t carry over into strategies and actions for reducing impaired driving.

Of the two stations scheduled to open in 2016 as part of the U-Link extension, the UW Station has both the most potential and the most challenges for improved bus-rail integration. This station, which is located on the east side of the Montlake Triangle, is isolated from the UW Campus and UW Medical Center by Montlake Boulevard NE, NE Pacific Street and NE Pacific Place.

Currently, the nearest pair of bus stops to the UW Station are located on NE Pacific Street in front of the UW Medical Center. These stops are roughly 900-1,000 feet away, approximately a 4-5 minute walk. While this might be acceptable for less important transfers, it is long for such an important one, particularly if Metro proposes restructures that significantly increase transfers to Link.

Metro staff have said in the past that they were looking at moving the northbound stop by the UW Medical Center several hundred feet east of its current location, but have not yet released any solid plans. Although this would help some, the walking distance for the northbound stop would still be 800 feet, with the southbound stop still over 1,000 feet away from the station.

The State Legislature recognized this challenge as far back as 2010 and asked WSDOT to study changes to improve transfers in the Montlake Triangle area as part of the SR-520 project. While the study was informative and  made several good suggestions, it does not reflect Sound Transit and Metro’s new vision of an integrated, user-friendly transit system.

END_OF_DOCUMENT_TOKEN_TO_BE_REPLACED

Yesterday the Sound Transit (ST) Board met to review the Long Range Plan (LRP) update, including discussion of the existing LRP text and corridors. As a reminder, the LRP represents the fiscally unconstrained vision of the Sound Transit system, selections from which will be used to develop a Sound Transit 3 (ST3) ballot measure. This workshop (materials available here) was a check-in on the LRP process that began nearly a year and a half ago when the board decided to accelerate ST3 planning for a potential 2016 ballot measure. Over the next two months, the ST Board will finalize the updated LRP, which will then be used to develop ST3 investment scenarios which would emphasize investment priorities such as completing the “spine” or maximizing system integration.

Staff began the meeting by presenting a “Chair’s Mark-ups” of the 2005 LRP text. Staff updated the text to begin the discussion and reflect some of the changes that have occurred since the plan was adopted in 2005. These changes included adding recent board policy decisions concerning station access and transit-oriented development. It also included updated definitions of bus rapid transit (BRT), including grade-separated busways and bus-only lanes. Staff also attempted to “tighten” the goal language to reduce repetition.  Finally, staff presented a high-level overview of the light rail, high capacity transit, bus rapid transit, express bus and commuter rail projects identified by the public as part of the plan update.

Councilmember Roberts asked that text around system integration be added to reflect the integration work currently underway between Sound Transit and Metro. Secretary Peterson said that WSDOT should play a larger role, that there need to be better integration of long-term land use planning with LRP corridors and that Sound Transit’s projects need to support local land use decisions. Another member wanted to add citizens’ health to the goals, but was unsure how to measure it.

The workshop maps show the new rail and HCT corridors that came out of the public process. There aren’t many of them because the existing LRP is already extensive. The biggest addition is West Seattle-Downtown light rail, formerly a monorail corridor. The map below shows the existing long-range corridors in gray, and the new corridors in bright colors and numbers. In some cases rail and BRT corridors overlap; e.g., Renton-Kent-Puyallup has both an LRT corridor (#7) and a BRT corridor (#33). Only one would be built, but the plan has both options. The BRT corridor continues to downtown Seattle, basically a variation of the 578. But BRT implies more than ST Express: it means frequent service and transit lanes.

END_OF_DOCUMENT_TOKEN_TO_BE_REPLACED 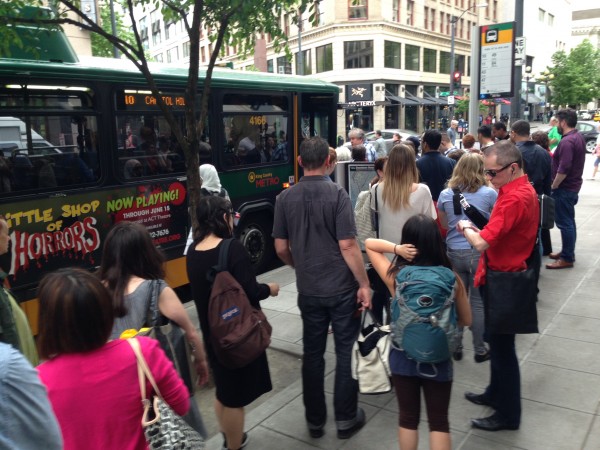 Tomorrow’s election is going to be close and every vote is going to count. As a daily reader of STB, I’m not worried about you voting Yes on Prop 1. But now is the time to get your friends, family and co-workers to vote as well as all of the other people that value Metro as much as you. Here are three things we can all do to get out the vote:

This morning Puget Sound Bike Share (PSBS) sent out a substantial and very exciting update confirming rumors that a new, financially solvent bike share vendor has been selected and that the private funding necessary for a full initial launch has been secured. Details on funding will come in May, and an online survey for station locations has been posted online. Earlier this week PSBS published a job posting for a general manager, hinting that a concrete implementation and financing plan had come together. News release below:

Alta Bicycle Share and 8D Technologies’ software for Seattle will build upon solutions tested and successfully deployed by bike share networks in Washington D.C. / Arlington, Boston, Minneapolis, Melbourne (AUS), London (UK), Toronto, Ottawa, and Montreal (CAN).  Seattle’s will be the first program to launch with the new Alta/8D hardware solution.  Consistent with Puget Sound Bike Share’s plans to launch Phase I of the program in South Lake Union, Downtown, Capitol Hill and the U-District, the agreement includes delivery of 50 stations.

An order for 500 bikes will be placed with a well-known global manufacturer later this month. END_OF_DOCUMENT_TOKEN_TO_BE_REPLACED 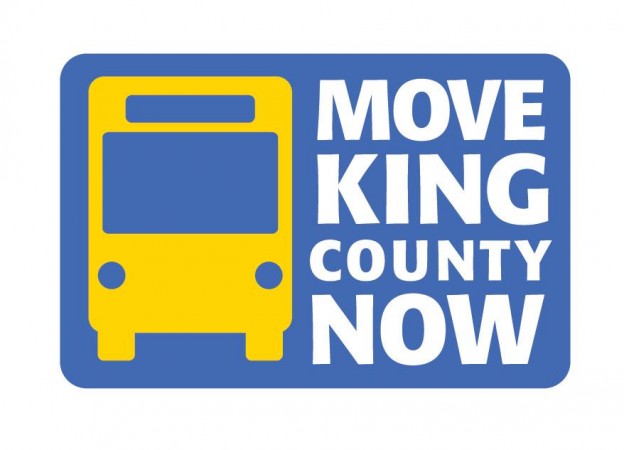 For those of us who live or work on the Eastside, it can be hard to get to after work events in Seattle. Luckily, Fuse Washington will be hosting two Move King County Now fundraiser in Bellevue and Redmond on March 24th and April 7th. The April 22nd special election is fast approaching and your financial contribution and/or boots on the ground are key to passing Proposition 1. Maintaining existing bus service is critical and if Proposition 1 fails the Eastside will see significant and painful cuts in transit service. I encourage STB readers to go and bring a friend or coworker along. On a personal note, I’d like to add that the Bellevue Brewing Company’s beer and food makes up for its harder to reach location. Cheers!

Beers for buses – Redmond (B-Line, 545, and all other Redmond TC routes)