Last week ST released its Final Environmental Impact Statement (FEIS) for the light rail segment from Northgate to Lynnwood Transit Center, due to open in 2023. Mike Orr wrote up the Draft EIS two years ago (and an update here). The main difference is a formal preferred alternative, although it also refines estimates and describes mitigations in response to various public concerns.

As before, there are three segments. Segment A runs from Northgate to N 185th St. Segment B continues to just south of Lynnwood TC. Segment C is the terminus in Lynnwood. The “preferred alternative” is new since the DEIS, and contains ideas taken from many other alternatives. It has the following stations:

There are also two “optional” stations: the much desired N. 130th St.($30-50m), and 220th St. SW ($50m)*, the latter west of I-5. The study says that 130th St. would largely cannibalize riders from 145th. If the study considered the likely faster bus access on 130th, a quick scan suggests it doesn’t say so except to acknowledge stakeholder comments to that effect. In fact, “I-5 access” is referenced as an advantage rather than an impediment.** It’s certainly interesting that the bubble chart above shows that 130th St. boardings overwhelm those on 145th when both are present.

The Segment B PA is more expensive than most alternatives at $450-510m, and attracts 5,100 boardings (5,300 with 220th added). The added expense pulls the Mountlake Terrace station out of the freeway median, both improving the walkshed and avoiding disruption to bus service during construction. It also switches to the west side of I-5 [north of Mountlake Terrace] rather than running in the freeway median, more expensive but also preserving the option for a 220th Station.

Segment C’s PA is $340-380m and will draw 17,900 boardings, but 17,200 if the two optional stations slow the trip to Seattle. The cheaper options place the station further from future development.

Link should dramatically improve travel times to and from Seattle, although travelers from Lynnwood to Bellevue and Redmond should probably stick with buses on I-405: 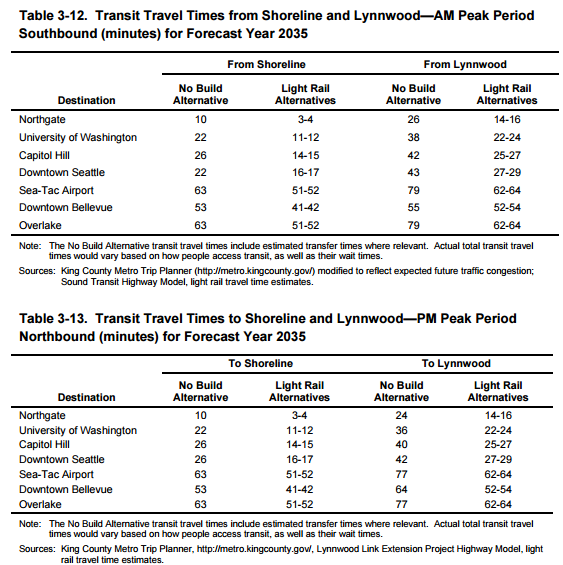 Construction on the 8.5-mile extension will begin in 2018. The total cost of the preferred alternative is $1.5-1.7 billion to build, and roughly $16m annually for operations and maintenance. Unfortunately, the current capital budget is $1.322 billion*. If the financial picture hasn’t improved since they produced that figure in 2013, ST may look to reduce scope rather than add additional stations or features.

Within the basic parameters of I-5 alignment, the preferred alternative does a pretty good job of maximizing support for future development in Snohomish County. In Segment A, it’s consistent with Shoreline’s development plans, though not with effective bus service to stations.

** Page 3-7: “However, the [145th] station would serve several populous neighborhoods in Seattle and Shoreline, and it would have convenient I-5 access. The NE 155th Street Station (A5 and A7) would also displace residences, and add a multistory garage in a mostly residential area, but would lack I-5 access adjacent to the station.”