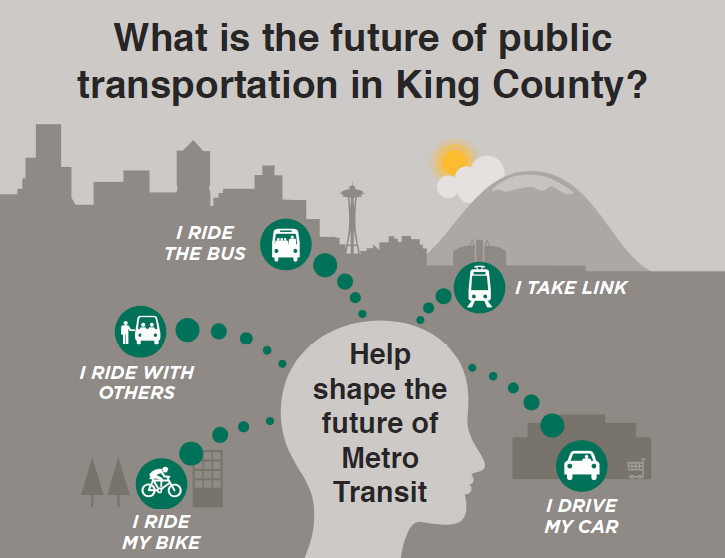 This Tuesday March 31st, Metro will launch its first long range planning effort in a very long time with an exciting two-part event at the Downtown Seattle Central Library. The event, which starts at 6:00 pm, will begin with six facilitated break-out sessions that will dive into key topics.  Each break-out sessions will be lead by subject area experts from a variety of organizations and include:

The discussion from each break-out sessions will then be used to identify common themes and the overall vision of where participants want Metro to be in 25 years. If you care about the big picture vision of transit in King County this event is a must.

Once break-out sessions have wrapped up the event will transition directly into the panel discussion guided by the themes and vision generated in the break-out sessions. Panelist include Jarrett Walker (transit planner extraordinaire), Rebecca Saldaña (Executive Director of Puget Sound Sage) and Mark Hallenbeck (UW transportation researcher and BIG picture thinker). This discussion will be moderated by Rita Brogan of the Washington State Transportation Commission.

This promises to be a unique, blue-sky type of event that only happens a few times a year and I would strongly encourage those who are interested to attend. More details are available here.

24 Replies to “What’s Your Vision for Metro’s Future?”