[This is the second in a promised series covering Spokane Moving Forward, the Spokane Transit Authority’s proposed ten-year plan to improve transit in the Spokane region, which will go to an areawide ballot in April. Previously I discussed the proposed Central City Line.]

16 miles southwest of Spokane lies Cheney, a town of about 10,000 permanent residents, one of the largest outlying population areas within the Spokane Transit Authority’s service area. Cheney would warrant some transit service, but not a great deal, were it not for the fact that it hosts the main campus of Eastern Washington University, the state’s  fourth largest university. With about 13,000 students, EWU swells the population of Cheney by about 7,000 when it is in session, with the balance commuters, mostly from Spokane.

Like college students almost everywhere, EWU students use transit in droves, and for more than just the commute. STA Route 66, the trunk route to Cheney, is STA’s third-highest ridership route, with nearly 2,600 weekday boardings — pretty impressive, for a service which only operates every half-hour in the off-peak — and is the only route to primarily use 60′ coaches. As you’d expect for such a productive service, it’s near the front of the line for improvement, if voters elect to fund STA Moving Forward at the ballot.

STA’s planners have chosen to group their top-performing routes into a package called the “High Performance Transit Network”, which smartly emphasizes the transit network (rather than a specific kind of vehicle or specific project) as the final product. HPT service is broken down into three kinds, characterized by headway and stop spacing, and identified by color:

The Cheney corridor is clearly interurban service, and the current Route 66 already meets the headway and stop spacing guidelines. Most of the money directed to improving service to Cheney will be capital work: improvements to rider amenities and the pedestrian environment, to make the service operate faster and more reliably. The most interesting, and by far the biggest improvement on this corridor, however, will be the proposed West Plains Transit Center.

Looking at the service map at the top of this post, you’ll notice that essentially all the service to areas west of Spokane is radial service, connecting Cheney, and the suburban communities of Airway Heights and Medical Lake, to downtown Spokane. This is, of course, fine if you only ever travel to and from Spokane, but good transit service is a network: it allows you to travel to every place it serves, in a reasonably direct path.

To make STA’s service to this area, the West Plains, a true network, the proposed transit center would be located at SR 902, where service to Cheney and Medical Lake diverges. It would provide a flyer stop in the median of I-90, with a pedestrian walkway to a set of bus bays and a park and ride adjacent the freeway. 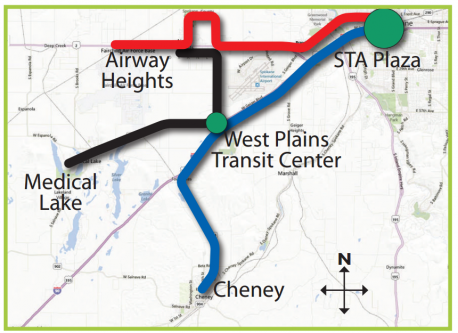 Local bus services in the West Plains would be restructured to connect the various communities in that area, and riders would access downtown Spokane via a transfer to the trunk line, which would not have to deviate from the freeway to pick them up. The map above outlines the concept.

What’s particularly clever about this plan is its efficiency: in addition to not having to run duplicative radial service, and being able to reinvest those hours providing better connections on feeder routes, the demand patterns for service to the West Plains mirror those of Cheney. EWU transit riders mostly reverse-commute, out from the city in the morning, and back in the evening; other West Plains riders follow the “normal” suburban commute pattern. At the time of day when most West Plains riders will travel, Route 66 trips tend to run under capacity in their direction.

As with everything I’ve looked at so far in STA Moving Forward, the plans for the Spokane-Cheney corridor are really smart, cost-effective ways to improve mobility in Spokane, and I hope Spokane-area voters agree. If I had a criticism, it would be that the weekend minimum service level for interurban HPT — hourly service — is a little low. While raising the necessary money may be difficult, or take a long time, in Spokane, a half-hourly service is the longest headway that can be considered convenient. A long-term goal of getting to half-hourly, seven days a week would be a great aspiration.