What: We need to serve Ballard with Link via SLU & Fremont; not via Belltown & Interlake, and not with a 7 mile long tunnel under Queen Anne. 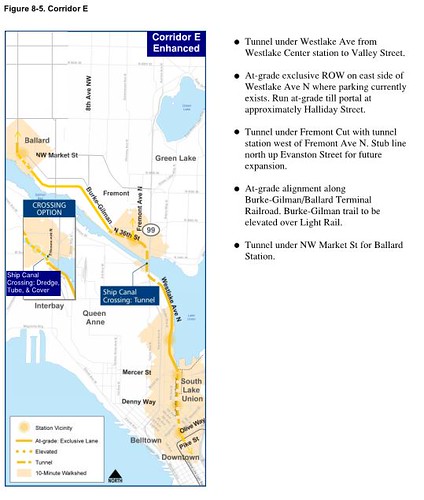 Why: Denny/SLU are significantly larger population centers than Belltown/LQA and growing! We all take issue with Sound Transit’s assessment of the number of riders. By utilizing the latest Downtown Seattle Association demographic reports (2014) for the neighborhoods of Seattle, we can have an honest discussion of which areas deserve high capacity transit. Belltown has a population of 10,990 and employment near 10,250. Compare that with the Denny Triangle, which has a population 5,040 and employment at 19,385. Lower Queen Anne has a population of 6,980 and employment estimated at 12,670. Compare LQA with boom town South Lake Union at a population of 5,340 and a staggering employment at 35,990! Interbay isn’t even designated as an Urban Village, where as Fremont has a population near 15,000 and growing. Let’s assume our target rider estimate numbers are the maximum between employment and population for each neighborhood. That results with the SLU/Fremont route racking up 70,375 potential riders (19,385 + 35,990 + 15,000) compared to Belltown/LQA at about 23,660 potential riders (10,990 + 12,670). Bypassing 70,000 of the most urban minded people in the city would be downright idiotic. Especially when we consider that LQA is already served by a grade separated 2-3 minute ride into Westlake, the Monorail (more on this later). But I don’t want to pit neighborhoods against each other. We need grade separated transit to all major destinations if Seattle is to blossom into a functioning world class city. So now that we have established there is a precedence for a SLU/Fremont line over Belltown/LQA, let me unveil the details of how.

How: I envision a revamped Corridor E from the Ballard ST Final Report (http://www.soundtransit.org/Documents/pdf/projects/Ballard/20140603_B2D_Report.pdf). This route was set up to fail from the beginning by not tunneling under Westlake Ave. A non-exclusive surface alignment crossing two of the busiest intersections in the city has been proven to be a bad idea by the fact that people can walk faster than the SLUT. The city’s recent announcement of a study to give the SLUT exclusive lanes is still only a bandaid on a bad design. From Westlake Center, a bored tunnel will make its way under Westlake Ave towards Lake Union Park. Stations will be placed at the intersections of Denny & Westlake and Mercer & Westlake.

From the Mercer station, Ballard link will daylight into exclusive lanes to utilize the former 1890 Lake Union Streetcar corridor, which is now a 1.5 mile long parking lot directly east of Westlake Ave N. A cheap platform station would be most effective at Galer due to the pedestrian bridges from Aurora and across Westlake. The road, including the parking lot, has a 120 feet wide ROW along the west side of Lake Union from the park up to almost the Aurora Bridge. Compare that to MLK Way with a ROW of about 75 feet. The geography of Westlake Ave N is flat, wide, and has no cross streets as it is pinned between the lake and a cliff. If ever there was a place in the world to utilize a surface alignment (exclusive lanes of course), this would be it. Westlake Ave N is a gift from the transit gods; unobstructed surface alignment, cheap, and little development to pose much objection.

The transition into Fremont is where the fun begins. A tunnel would be the logical choice, as a bridge would undoubtedly still have to raise for passing vessels. ST should explore a dredge, tube, and cover tunnel for crossing the Fremont Cut, similar to the BART’s Transbay Tube. A dredge, tube, and cover technique would be the quickest option at this scale. Excavation and tube construction would occur concurrently. Tube construction will be in a controlled, easy to work in environment making it much simpler than deep bore. The dredge, tube, and cover technique would be comparable to the cut and cover tunnel technique; cheaper, simpler, but restricted by the surface right of way. This phase of the project would have to be timed with the offseason of the salmon runs to minimize any impact onto the salmon. The location of the Fremont station is a bit more complicated than the SLU stations. Fremont is a hub and funnel from all directions north into the city. A prudent design would account for expansion, which is why ST should consider the Fremont station to have a “WYE” or Flying junction that branches to the north for the future Blue Line up Aurora (http://www.seattlesubway.org/seattle.jpg). I will skip over the topic of location for the Fremont Station, as this could be the topic of many subsequent articles. But for an exercise, let’s assume the station can also be dredge, tube, and cover centered on Evanston Ave N, with the branch stem up Evanston and pedestrian access from the southwest of the canal as well to serve Seattle Pacific University.

From the tube tunnel, Ballard Link will once again daylight onto exclusive surface lanes. Not down congested Leary, as the Streetcar proposal, but down the quiet parallel corridor of the Burke-Gilman Trail/Ballard Terminal Railroad. The City of Seattle has the luck of owning both the Burke-Gilman Trail and the Ballard Terminal Railroad; a combined ROW of about 30 feet that only intersects dead-ends and business entrances. Although the Ballard Terminal Railroad is currently under a 99 year lease with the city, the company has lost all but one customer, the Salmon Bay Sand & Gravel (http://en.wikipedia.org/wiki/Ballard_Terminal_Railroad). The Ballard Terminal Railroad Company recently lost its appeal for usage of the Eastside Rail Corridor with Kirkland, and using that as an example, Seattle can revoke their lease given the recent political and judiciary climate. Now to calm all the bicycle advocates that thought I was committing heresy with my suggestion of tearing up the Burke-Gilman Trail in favor of Ballard Link, I propose we build an elevated bike path over this portion of Ballard Link, similar to London’s recent SkyCycle proposal (http://www.theguardian.com/artanddesign/architecture-design-blog/2014/jan/02/norman-foster-skycycle-elevated-bike-routes-london). Together, Ballard Link and the elevated Burke-Gilman can make their way towards Ballard unimpeded by stoplights (zero stoplights on this section). Where Ballard link eventually decides to dive into a tunnel to serve the underground Ballard Station (most likely on 15th Ave NW or 24th Ave NW), the elevated Burke-Gilman Trail could continue elevated to complete the infamous “Missing Link”. Some might be asking why elevate the bike trail instead of Link, and the answer would be cost. The necessary structure to support an elevated bike path is significantly less intensive than an elevated train. The static load and dynamic forces on the structure from bicyclists and joggers would be negligible compared to the weight and forces of a moving train.Where we go from the underground Ballard Station, I leave that to you.

Comparison: How does this route compare to the Interbay and Queen Anne tunnel routes? Let’s assume worst case scenario, that the arbitrarily pointless speed limit for surface running trains is 35 mph & 55 mph in tunnel, my back of napkin math indicates 14-17 minutes from Ballard to Westlake (assumes 4.8 miles surface, 1.25 miles tunnel, 4 intermediate stations at 1 minute stops, 0.8 de-rate for acceleration to/from stop). This time is effectively the same as the fully tunneled Queen Anne route and the elevated Interbay route but at BILLIONS of dollars less. Of course, a more thorough evaluation of time and routing should be incorporated by professionals, but for the purpose of starting a dialogue, these numbers will have to suffice. Let’s not forget the fact that we can double up the Westlake portions for both a Ballard Link and Aurora Link, which will save additional billions $$$ that would have otherwise been wasted on a duplicate line.

Additionally: I don’t want to leave Belltown out of the grade separated fun. For them, I propose we actually utilize the Monorail and build an infill station at 5th & Battery. The Monorail is reliable, fast (2-3 minutes Westlake-Seattle Center), and most importantly, built & operating NOW! Too often we forget that the Monorail can be an effective piece of transit in our hodgepodge network. The incorporation of ORCA will only make it easier for people to use the Monorail. The small price of one elevated infill station could solve Belltown’s transportation problems for decades to come. Now THAT is cost effective! For those worried about the legality and construction issues of an infill station on a system 60+ years old, rest assured that ONLY the station would have to be constructed to today’s Building Code standards. We would not be on the hook to retrofit the entire system to today’s building codes.

Conclusion: I understand the desire to ask for as much money in ST3 as possible, but we need to be as realistic and sensible as possible moving forward with what we can accomplish. More and more it seems North King will not get the funding necessary to achieve all our goals. It is for that reason it is imperative to be as cost effective with our ST3 projects. How can we straight faced tell our posterity that we recklessly wasted away $4 Billion when an equally performing option for billions dollars less was available? I expect the excellence I know this City can achieve. I believe this enhanced Corridor E option to be the best option for serving Ballard from Downtown.