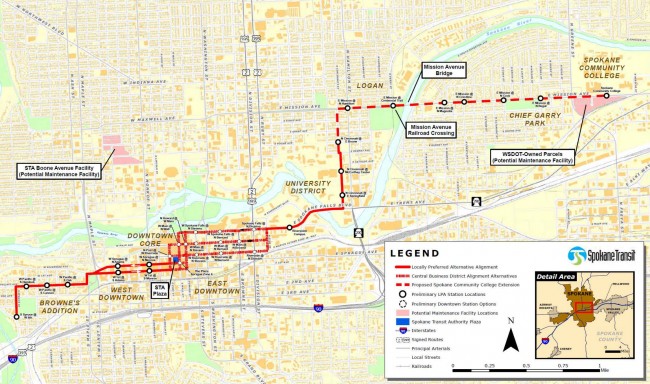 [This is the first in a promised series covering Spokane Moving Forward, the Spokane Transit Authority’s proposed ten-year plan to improve transit in the Spokane region, which will go to an areawide ballot in April.]

Enter Spokane as a visitor, and the the first place you’re probably going is downtown, to the shops, businesses, or restaurants, or to the spectacular and rightfully well-known Riverfront Park. If you’re a tourist, and you’ve done your homework, you might head next to Browne’s addition, which is a place of delightful parks, restored Victorian mansions and boarding-houses, and small, but lively restaurants; a neighborhood which feels very like the historic streetcar suburbia of inner-east Portland.

Speaking of homework, if you’re neither a resident nor a tourist, where in Spokane are you probably going? Probably to school, perhaps at Gonzaga University, perhaps in the University District — a budding, multi-college effort to build an urban campus just to the east of downtown — or maybe at Spokane Community College. All these walkable city destinations lie like a string of pearls centered on downtown Spokane, and ask to be joined together by high-quality transit service. Fortunately, STA has an idea to provide just that.

The product of studies going back at least fifteen years, the Central City Line is a proposed five mile, east-west route, which would connect all of these destinations with electric transit, operating at high frequency (10-15 minutes) throughout its span of service. After an alternatives analysis which contemplated several kinds of vehicle, STA has narrowed the possibilities down to three: electric trolleybus on fixed overhead wires (just like Seattle); ultracapacitor buses which would recharge at fast-charging stations on the route; and dual mode trolleybus/battery operation.

Early concepts for this corridor placed its east end at the north edge of Gonzaga’s campus, but last July, as part of its preparation for applying for Federal Transit Administration money, the STA board chose a Locally Preferred Alternative which extends down Mission Ave to Spokane Community College. The rapid evolution of off-wire electric bus technology is probably crucial to the inclusion of Spokane Community College, as the extension down Mission to the Community College adds two miles to the original three-mile route, and entails crossing a freight railroad and a long road bridge, both of which would add complexity and cost to the project if it were done with overhead wire.

I don’t have much to say about this project beyond that it seems like a great idea, and I hope it gets built as soon as possible. My only minor gripes about it are (a) that its legibility in the city center will likely be compromised by downtown Spokane’s (totally counterproductive but seemingly unassailable) 1970s-era system of one-way streets, and (b) the neighborhood along Mission Ave, which surrounds the extension to SCC, is rather low density for a place that will be getting the best transit service for hundreds of miles around, and as far as I can tell, there’s no plan to rezone it.

You can read all about the Central City Line at its page on the Spokane Moving Forward website. The “Supportive Materials” section, in particular, contains almost all the information you could possibly want to know about the proposed alignment. Next post, we’ll talk about STA’s plans for the western inter-city corridor, along I-90 from Spokane to Cheney.