Last week Sound Transit released its long-awaited Draft Environmental Impact Statement (DEIS) for Link’s extension south from Angle Lake (S. 200th) to Federal Way Transit Center (FWTC). As the DEIS is the document that guides the ST Board to select a Preferred Alternative in early 2016, the DEIS is perhaps the last chance for advocacy and public comment to sway a project’s future before political inertia begins to harden opinions and preclude positive change. You can comment now through May 26 here.

As a refresher, Link to the tip of Federal Way (S. 272nd) was included as the marquee project of ST2 in the South King subarea, only to be deferred south of Highline College when South King fell harder, and recovered more slowly, than its peer subareas during the recession. In  early 2012, County Councilmember Von Reichbauer and Senator Tracey Eide successfully funded $24m for design and engineering for the project so that it could be ‘shovel ready’ as soon as funding were to be identified, and the DEIS is the result of that effort. Most recently, a relatively unexpected TIFIA loan saved Sound Transit so much in financing costs that it freed up an estimated $200-300m in capacity, money which could potentially pay for Link to get from Highline to 272nd St, leaving just the segment to Federal Way unfunded and to be covered by ST3 and/or federal grants.

The DEIS presents 4 general alignments: SR99, I-5, I-5 to SR99, and SR99 to I-5. Within these 4 options are over a dozen station alternatives that further complexify the choices, something with which anyone who has been following the alphabet soup of alternatives in East Link can identify. Notably – and perhaps suspiciously – all alternatives present nearly identical ridership projections  (24,000-27,500 daily riders) and with travel times that only vary by 2 minutes (12-14 minutes). Cost estimates vary by nearly 70%, however, from roughly $1.25B to just over $2B.

While this may seem like a dizzying array of options, Sound Transit has done a good job of presenting the material, both in the video above and in an interactive exercise at federalwaylink.org; and the corridor itself is linear and relatively uncomplicated.

But all the options essentially boil down to a handful of fundamental questions:

A summary of each alignment, and brief commentary, are after the jump.

With half a dozen alternatives within each of the 4 primary alignments, it may be helpful to frame the discussion by presenting the extreme options of each alignment and circling back toward the middle.

The I-5 options range in cost from $1.28 to $1.55B. The bare bones $1.28B option would cut all corners along the way, covering the roughly 8 mile corridor in just 12 minutes, for a 40mph average speed. It would be nearly 4 times as fast as RapidRide A between Federal Way and Angle Lake. It would use the future SR 509 ROW to reach I-5 from Angle Lake, running adjacent to the southbound lanes of I-5 the entire way to Federal Way TC. It would skip Highline, stopping instead at an at-grade Kent-Des Moines station a little over 1/4 mile from the college. It would dip underneath S. 272nd St in a shallow trench to serve the existing Star Lake Park & Ride. Finally, it would not serve the Federal Way Transit Center directly, instead creating an “I-5 station” roughly halfway between the current transit center and the S 320th P&R. It would be the fastest, and cheapest, and only serve 11% fewer riders than the most expensive options, but it would skip both major population centers and major transit destinations and facilities. TOD potential would be dismal, with just 51 available acres along an 8 mile alignment, or roughly the total size of Seattle’s Volunteer Park. Its 24,000 riders would likely be exceedingly peak oriented, and trains would likely run comparatively empty off-peak.

The most expensive I-5 option ($1.55B) would take 2 minutes longer (14 minutes) and serve an additional 1,500 riders  (25,500) per day by briefly deviating from I-5 to serve Highline CC from a station on the east side of SR 99. Given that 99 and I-5 are less than 1/4 mile apart in this area, the deviation adds minimal distance. The walk to Highline, though needing to cross SR 99, would be roughly 1,000′.  TOD potential would increase to a slightly less dismal 72 acres.

The cheapest SR 99 alignment ($1.69B) would be able to match the 12 minute travel time of the fastest I-5 option, while serving 26,500 riders. It would run elevated in the median of SR 99 until Highline, where it would deviate slightly west to serve Highline directly with a station in its current east parking lot. It would then return to the SR 99 median before transitioning to the east side of SR 99 to serve an elevated station at 272nd (Redondo Heights P&R). Finally, it would terminate just west of Federal Way TC, not fully deviating to the transit center and staying pointed south towards Tacoma. TOD potential would roughly double from I-5 options, to 117 acres.

The gold-plated SR 99 option ($1.93B) would be one minute slower (14 minutes) in exchange for doubling TOD potential yet again (219 acres), adding two stations at S 216th and S 260th, and eliminating most visual impacts by building a mix of elevated and  trench stations while still serving all destinations directly. It would serve 26,000 riders. Like the cheapest SR 99 option, it would only obliquely serve Federal Way TC, with a station between SR 99 and the current transit center. 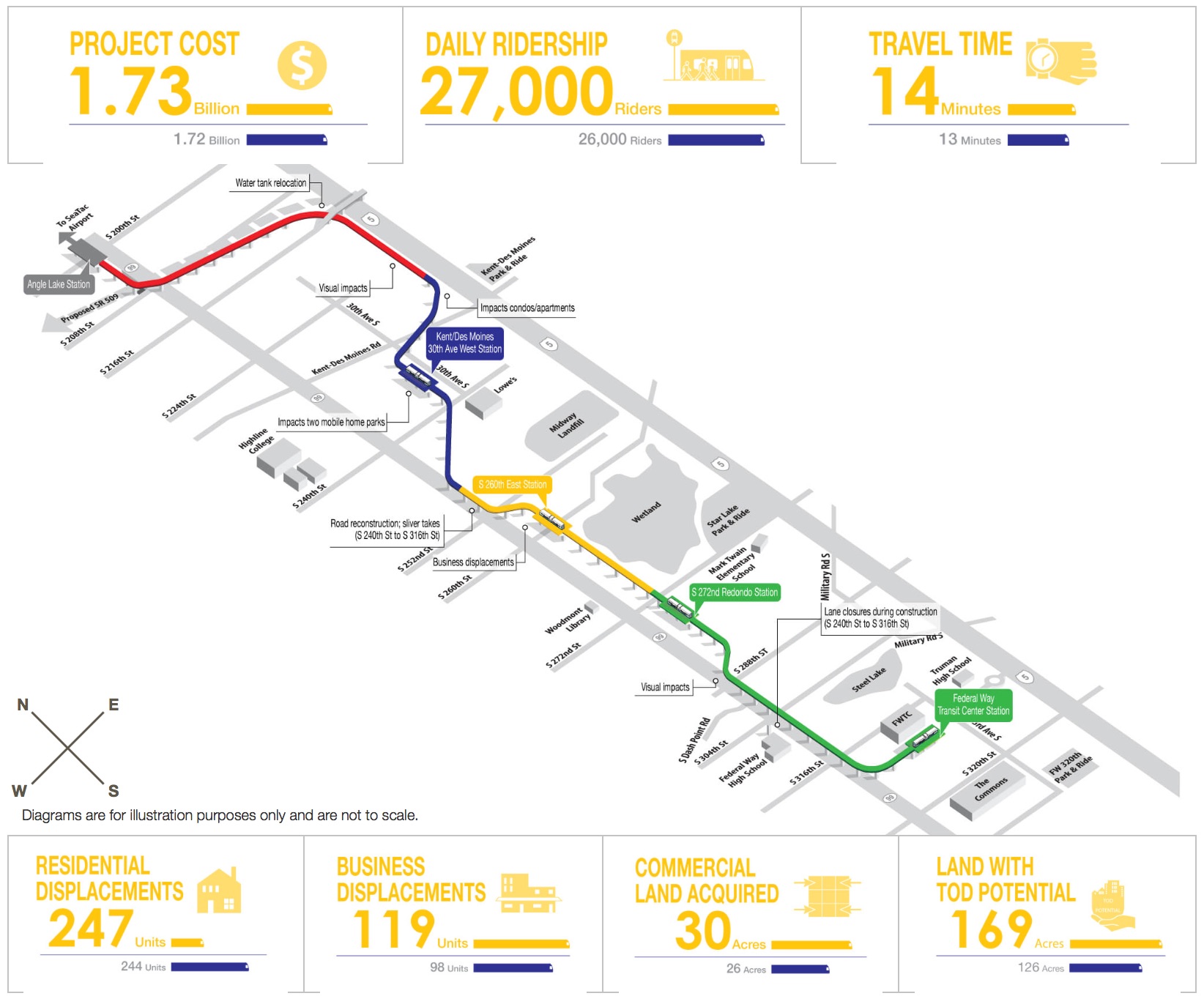 In between these are two options that use portions of both corridors. The SR 99 to I-5 alternative prioritizes a direct path from Angle Lake to Highline and an I-5 alignment from Highline to Federal Way. The “SR 99 to I-5 to SR 99 to I-5” is not as ridiculous as it sounds, using SR 509 and I-5 before deviating to Highline before deviating back to I-5. Doing so only adds 1/4 mile to the alignment.  South of Highline, all alternatives are forced to choose either SR 99 or I-5 for the duration; all major deviations center around Kent-Des Moines Road.

What About the Politics of Link to Federal Way?

Despite a successful joint rezoning effort in the Midway area, Kent and Des Moines continue to disagree about the alignments, with Kent preferring SR 99 while Des Moines strongly favors I-5. Sources tell us that Des Moines, hardened from their experience with SeaTac Airport, is prepared to take legal action to stall any progress on a SR 99 alignment. Last summer, Des Moines Mayor Kaplan said, “We are not willing to take the impacts” of an SR 99 alignment.

Kent, on the other hand, has shown themselves to be fairly progressive, both in terms of upzoning and in terms of opposing walkshed-killing freeway alignments.  The two cities’ public comments’ on the DEIS will likely have a huge impact on the range of possibilities.

Some political energy already seems to be coalescing around an I-5 alignment, though with preemptive sensitivity about urbanist criticisms of freeway stations. After our last piece on Federal Way Link – in which I argued that the inherently uncompetitive travel times between Federal Way and Seattle meant that Link should seek to maximize local development – County Councilmember and ST Board Member Dave Upthegrove reached out to me to talk about the DEIS. Over coffee, he enthusiastically supported both TOD and an I-5 alignment, arguing that station location was the most important consideration, not the alignment of intermediate trackage. Accordingly, he cheerfully touted the I-5 alignment that deviates to serve Highline College as being the best compromise: moderate in terms of cost ($1.55B), competitive in terms of ridership (25,500), and the likeliest to avoid years of litigious delay.

If you don’t believe in either the utility or likelihood of a S 216th station, then Upthegrove is right that an alignment that performs just as well but keeps jurisdictions happy is likely the prudent choice. But his argument also benefits from geographic luck. The proximity of SR 99 and I-5 mean that Des Moines is able to have its cake and eat it too, minimizing the dreaded ‘impacts’ of elevated light rail while still having the marquee station it wants at Highline.

Further south, there won’t be such an convenient out for Federal Way. I-5 and SR 99 are as far as a mile apart between 272nd and FWTC, making the choice between one or other both more necessary and more difficult. My chips are still with SR 99. Despite the inevitable political headwinds of such a choice, mid-century arterials are just fundamentally more fixable than land-gobbling interstate highways. Having more stations – with real walksheds – maximizes the ability of future generations to build communities that far outdo our presently timid ambitions.

229 Replies to “How Should Link Get to Federal Way?”