Yesterday the Sound Transit (ST) Board met to review the Long Range Plan (LRP) update, including discussion of the existing LRP text and corridors. As a reminder, the LRP represents the fiscally unconstrained vision of the Sound Transit system, selections from which will be used to develop a Sound Transit 3 (ST3) ballot measure. This workshop (materials available here) was a check-in on the LRP process that began nearly a year and a half ago when the board decided to accelerate ST3 planning for a potential 2016 ballot measure. Over the next two months, the ST Board will finalize the updated LRP, which will then be used to develop ST3 investment scenarios which would emphasize investment priorities such as completing the “spine” or maximizing system integration.

Staff began the meeting by presenting a “Chair’s Mark-ups” of the 2005 LRP text. Staff updated the text to begin the discussion and reflect some of the changes that have occurred since the plan was adopted in 2005. These changes included adding recent board policy decisions concerning station access and transit-oriented development. It also included updated definitions of bus rapid transit (BRT), including grade-separated busways and bus-only lanes. Staff also attempted to “tighten” the goal language to reduce repetition.  Finally, staff presented a high-level overview of the light rail, high capacity transit, bus rapid transit, express bus and commuter rail projects identified by the public as part of the plan update.

Councilmember Roberts asked that text around system integration be added to reflect the integration work currently underway between Sound Transit and Metro. Secretary Peterson said that WSDOT should play a larger role, that there need to be better integration of long-term land use planning with LRP corridors and that Sound Transit’s projects need to support local land use decisions. Another member wanted to add citizens’ health to the goals, but was unsure how to measure it.

The workshop maps show the new rail and HCT corridors that came out of the public process. There aren’t many of them because the existing LRP is already extensive. The biggest addition is West Seattle-Downtown light rail, formerly a monorail corridor. The map below shows the existing long-range corridors in gray, and the new corridors in bright colors and numbers. In some cases rail and BRT corridors overlap; e.g., Renton-Kent-Puyallup has both an LRT corridor (#7) and a BRT corridor (#33). Only one would be built, but the plan has both options. The BRT corridor continues to downtown Seattle, basically a variation of the 578. But BRT implies more than ST Express: it means frequent service and transit lanes. 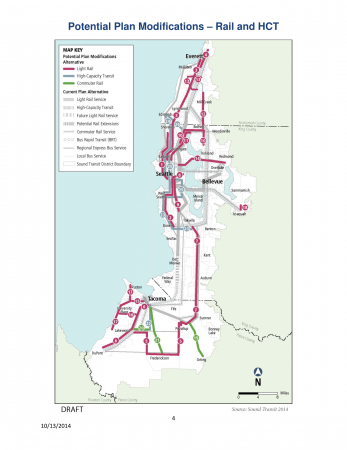 Discussion related to the LRP corridors was unstructured with most board members voicing support for priority projects in the areas they represented. Executive Constantine started this discussion by identifying the Downtown Seattle to West Seattle corridor, the former Monorail corridor, for addition into the LRP.

One member asked if existing corridors could be deleted, especially those that are unlikely to ever be built in the next 70 years. Staff answered that they should review all existing corridors for relevance. But there is reluctance to delete corridors that might be needed even if they’re never built, because their presence in the LRP sends a message to the cities to think about transit needs in those areas, and to make appropriate land-use decisions so they’ll be ready for future regional transit.

The Pierce County delegation had the most to say about specific corridors. Mayor of Tacoma Marilyn Strickland said Tacoma’s #1 priority of the new corridors is #15 (Tacoma Link to Tacoma Community College). That would complement the first Tacoma Link extension on MLK Avenue and also serve University Place, which is asking to be upgraded to an Urban Center. On the other hand, she did not see the need for #38 (BRT from University Place to Titlow Beach). The east Pierce members mentioned several corridors between Lakewood, Parkland, Puyallup, and Orting that would help with JBLM congestion, #27 (BRT Puyallup Meridian Avenue), and #32 (BRT Tacoma – Bellevue). They see #32 as getting especially high ridership.

The Snohomish County delegation was much more modest. They stressed that “North Everett” should be seen not as a new corridor but as intended in the original corridor (“to Everett”). They weren’t sure about #24 or 26 (HCT downtown-Ballard-Edmonds and HCT Edmonds-Lynnwood) and would like more information on them. They questioned #12 (LRT Mill Creek – Eastside Rail Corridor); it may be too low-ridership to be appropriate for ST, perhaps a project for Community Transit instead.

The Eastside delegation recommended #31 (ST Express/BRT Issaquah Highlands – Sammamish – Redmond – Overlake). They also said #14 (LRT UW – Sand Point – Kirkland – Redmond) may be better than LRT on highway 520 because the latter’s connections on the Seattle side are bad.

From Seattle there was mention of #8 (LRT Madison), #30 (BRT Madison), and #9 (LRT Duwamish bypass). The board was unsure whether the Madison corridors should be deleted since SDOT is already working on BRT there. And there’s one corridor I’m not sure whether it was mentioned or not, and it’s the oddest corridor: #25 (HCT West Seattle – Central District – Queen Anne – Ballard).

Perhaps the best comment during this discussion came from WSDOT Secretary Peterson, who asked which performance measures will be used to identify the most promising corridors, such as density. She wanted a list of how each long-range corridor performs against these metrics, why the corridor is included or proposed, and whether it’s still relevant.

Mike Orr contributed to this report.