After almost four months of consideration, Community Transit announced that it has picked the route to extend the Swift Blue Line to intersect with Link. It will maintain a stop at Aurora Village Transit Center, as shown above. Alternatives would have continued on Aurora, skipping the transit center.

Meridian is a residential street less likely to experience traffic. Survey respondents prioritized “maintaining bus-to-bus connections at Aurora Village Transit Center.” However, most, but not all, routes that serve the Transit Center would still have had easy transfer points had Swift continued on Aurora. It’s ultimately hard to gauge the transfer opportunities until Metro chooses a service plan after Lynnwood Link.

Moreover, an Aurora Avenue/185th routing would have been more direct, used existing and planned BAT lanes, served a wider variety of land uses, and conveniently connected them to the Link station. Some of these benefits assume that CT would place relatively expensive Swift stations to serve riders to which it is not accountable.

While the relative travel times with 2024 traffic patterns are uncertain, it appears the speed advantages of an Aurora alignment are more likely to be more important for future CT riders than the transfer opportunities, despite the survey conclusion. While by no means a catastrophe for anyone, most future riders are likely to regret this decision.

The projects were part of a larger disbursement of federal transportation funds, including highway funding, which must be approved in a meeting of the PSRC’s Executive Board on July 26. Area agencies submitted proposals for a competitive bid process earlier this year.

PSRC staff selected the five projects from that group of proposals, and created an additional list of projects, including Rainier RapidRide and Colman Dock, that could receive funding should additional federal funds become available.

Three of the five projects did not get as much funding as they initially requested. Four of the five projects are for BRT, and East Link also got a boost. According to PSRC spokesperson Rick Olson, that’s because the funding competition was remarkably popular. Bidding agencies worked together to make sure that funding dollars could be used to the furthest possible extent.

“The projects that got less funding than requested this round voluntarily took cuts in order to get more projects funded,” Olson says. “We had far more funding requested than was available.”

The segment of East Link between Microsoft and downtown Redmond gets $7 million towards the Microsoft and Redmond stations and the guideway between them. According to Sound Transit’s presentation to the PSRC on the project, the Redmond funds will also be applied towards a cycle track near the downtown Redmond station, a bike and pedestrian bridge over Bear Creek, and several trail connections.

END_OF_DOCUMENT_TOKEN_TO_BE_REPLACED

A while ago on a Sunday Open Thread, I aired a trial balloon of doing a podcast on transit issues.  Most of you in the STB comment threads wanted text instead so I’m going to oblige.  I’m hoping based on the responses here to make time to do this monthly or twice a month with a major newsmaker who we would not hear from otherwise that has an impact on transit services north of Lynnwood.  So here we go with the North by Northwest Big Interview!

For my first subject, I decided to choose a friendly face and also a voice who in some of the big debates affecting the North by Northwest region who has not been heard from.  From the Future of Flight Transit Desert to the proposed Paine Field Terminal – the media has (mostly) neglected Mayor Jennifer Gregerson’ s voice.  Today is about turning that around and I sincerely appreciate her interest and participating.

For those on e-mail subscription like I, I’ve decided to insert a jump point here so if you want to read the whole interview – just click the header.  For the over 1,200 word interview itself, read on.

END_OF_DOCUMENT_TOKEN_TO_BE_REPLACED 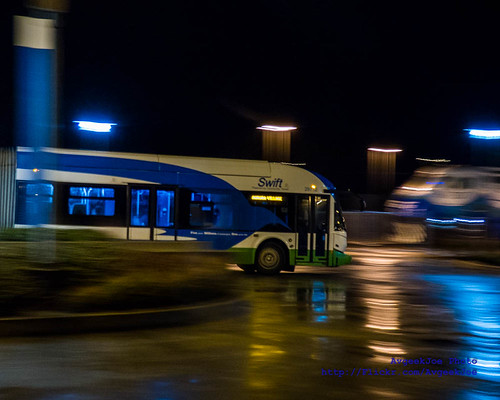 My photo of a Community Transit Swift I bus

HB 1393 – the local option – for Community Transit has a first hearing tomorrow in the House Transportation Committee for HB 1393 is scheduled for 3:30 p.m. Wednesday, Feb. 4 at the John L. O’Brien Building, House Hearing Rm B.  It’ll also be on TVW.

So if you use transit in Snohomish County or care for your Snohomish neighbors, please go here and request passage of HB 1393.   If HB 1393 passes, voters in Community Transit’s service district will get to vote up or down on a 0.3 percent sales tax hike.

So where would the money going to go?  Fair question:

For Community Transit, after this June’s rebound into Sunday hours and a few route adjustments – “current forecasts indicate that any new service hours added in the next few years are likely to be taken up by schedule maintenance—adding time to current trips because their actual travel time is getting longer.”  So we transit advocates can forget about Swift II, service to Paine Field – possibly in lieu of a light rail diversion, or just about anything else on a Community Transit wish list.  HB 1393 – is must pass as much as, if not more than ST3.

Oh and one last thing… 1800 Hours tonight, House Republican Chairman Dan Kristainsen who represents a nice swath of Snohomish County (and my Skagit) will hold his tele town hall w/ his 39th LD seatmate Rep. Scott.  Make sure to call into (360) 350-6256 at 6 PM tonight the 3rd and ask to please support HB 1393.  Or you could please also go here please and request passage of HB 1393 via e-mail please.

Community Transit last month received Federal Transit Administration approval to move forward with project development of the second Swift line, which would run between Canyon Park in Bothell and Paine Field/Boeing in Everett. Project development includes further route design and environmental review and must be completed before the agency applies for federal Small Starts funding to build the project. If all goes according to plan, Swift II could be operational in 2018.

“You can’t have a big league economy with a little league infrastructure,” Larsen said of the need for improved federal funding for transportation projects like Swift. “It’s the difference between being Super Bowl champions and being the Washington D.C. football team.”

As a member of the House Transportation and Infrastructure Committee, Larsen said he is involved in writing a new Surface Transportation Authorization bill that would fund programs like Small Starts, which transit agencies rely on to fund small-to-midsized capital projects.

After addressing employees at Community Transit’s Merrill Creek base in Everett, Larsen joined them for a Blue Friday photo in front of a Swift bus before taking his tour of the route.

It’s important to remember however that although Congressman Rick Larsen is supremely awesome, Swift II needs all of the following:

So let’s work together, make new allies and get this done.  BOO-YEAH!

The last few years have not been kind to Community Transit or riders in Snohomish County. The Great Recession forced the largest cuts in the agency’s 39-year history, every winter has cancelled Sounder North runs, and the Oso mudslide interrupted bus service to Darrington for several months. Despite these setbacks, Community Transit will be able to welcome 2015 with open arms, with several major events planned.

This month, the Community Transit Board approved the addition of 27,000 hours of new service, of which 18,000 are to be used on Sundays and holidays. The June 2015 service change, five years to the month after the cuts to Sunday service, will bring hourly Sunday service on major routes and 20-minute headways on Swift.

To fund the new service, Community Transit will be raising their adult and DART fares by 25 cents effective July 1. The increased fare will bring the cost of a round-trip on commuter routes from Marysville, Stanwood and Snohomish to a staggering $11 for adults.