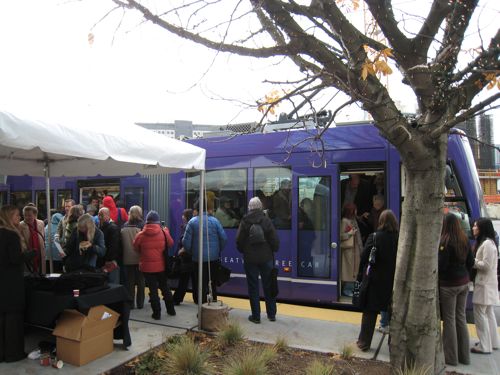 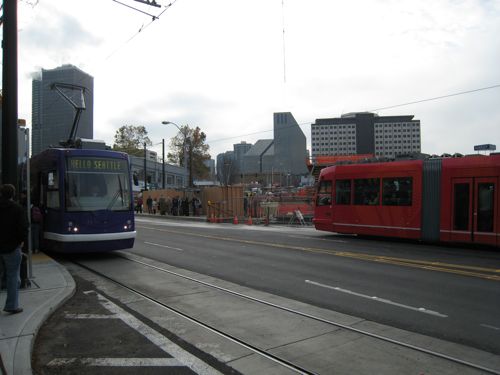 I snapped the photos above on my way to lunch at Whole Foods today. The sight of that many people cramming themsevles into a public transit vehicle for no real reason speaks volumes about why people prefer trains to buses.

Here’s an eyewitness report from a reader on the scene downtown:

I’m kicking myself for not having brought my camera to work today. My
office is at 6th & Stewart, and we have a great bird’s-eye view of the tiny rally for the SLUT’s inaugural passenger run.

At one point, several Metro buses and the Monorail were passing through that intersection while bike messengers circled the crowd and workers from a nearby daycare steered what looked like a miniature hay wagon stuffed with toddlers — it would have made a great “Spot the alternative modes of transportation!” game. (“Spot the VIABLE modes” would have been a much shorter round, unfortunately.)

They’re getting ready to do a second run on the Purple line. The crowd has mostly dispersed, revealing what appears to be a balding man in a skirt doing a celebratory scarf dance. (Not helping the cause, dude.)

What, no rickshaws? I’m disappointed, Seattle.