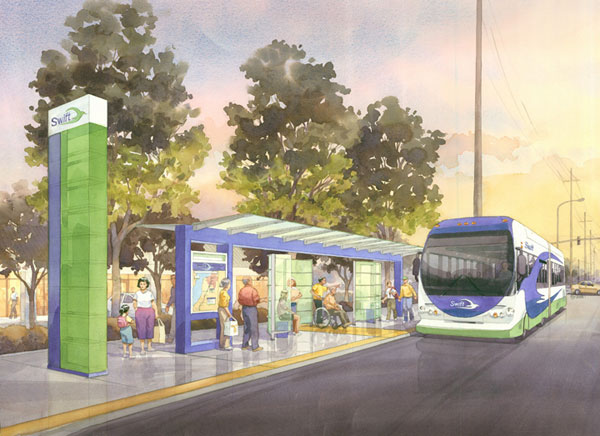 It hasn’t gotten nearly as much press as the Seattle Streetcar, but Community Transit in Snohomish County is working on a bus rapid transit system along Highway 99 that could be very successful, and will serve a lot more people. Swift will connect downtown Everett with the Aurora Transit Center, starting in 2009.

It has all the trappings of a good BRT system:

It’s all possible due to a collaboration between Community Transit and Everett Transit, Today’s Seattle Times notes:

CT and Everett last week transformed decades of struggle — including repeated attempts in the state Legislature to forcibly merge the two bus systems — into a display of harmony as they formalized plans to create a “trainlike” bus system along their shared Highway 99 corridor.

Further south, WSDOT has been building dedicated transit lanes on Aurora Ave in Shoreline. Phase 1 is complete, and Phase 2 will finish in 2012. So, when King County gets RapidRide going, we’ll have BRT all the way from Everett to Seattle along Highway 99.

Will it be as good as light rail from Seattle to Everett? No, of course not. There’s still the issue of crossing the Aurora Bridge, for example, without getting stuck in traffic. And an 80-passenger bus is more expensive to operate than a 400-passenger train. And (presumably) the Swift buses will have to move into general traffic lanes to bypass the slower local buses. And it’s still a bus. And on, and on…

But despite all that, it’s still got the potential to be a solid transit alternative. Sound Transit’s plan wouldn’t have gotten light rail all the way to Everett even by 2027. So having something up and running, even by 2012, is certainly welcome.