I’ve driven under the new 41st St. Interchange up in Everett a few times, but I’ve never gotten off there, and thus never seen the really neat signal setup they’ve got going on. I’ve never seen anything quite like this: 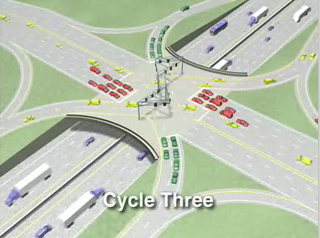 You can watch an animation of the interchange in action here.

This comes via WSDOT’s announcement that the HOV lanes on I-5 have been completed from Seattle to Everett.