In my previous post about possible options for revision of Metro service after Light Rail, one that attracted extra attention was the circulator idea, which would route almost all downtown-bound commuters into the light rail. This would add a transfer for many people, but it would also reduce travel time (if done right), maximally leverage the huge capital investment in light rail, and allow more frequent bus service.

Anyway, I haven’t done professional analysis on the viability of this concept, but with the help of STB Flickr Pool superstar Oranviri, I’ve sketched out how such a concept might work. I emphasize that I haven’t heard of anything like this coming out of Metro, nor do I think it likely that such a radical change would occur. However, even if full implementation isn’t in the cards, I think this might be an interesting thing to phase in during off-peak hours, to test its viability and reduce bus operating expenditure.

Maps and discussion after the jump.

First, a reminder of the current service: As a reminder, the 7 and 36 run at more or less 10-15 minute intervals all-day, every day. I don’t think I’ve ever seen a non-articulated 7! The 48 is frequent, but often stops at Mt. Baker or Columbia City evenings and weekends. The 42 is on the half-hour all the time, and the 39 runs every half hour except evenings, when it stops, and Sundays, where it’s hourly. The 32 and 34 are peak-only. There are also express versions of the 7 and 42 that are peak only. The 9 runs about once an hour weekdays only, except for half-hours in the peak direction (as far as the Valley is concerned). 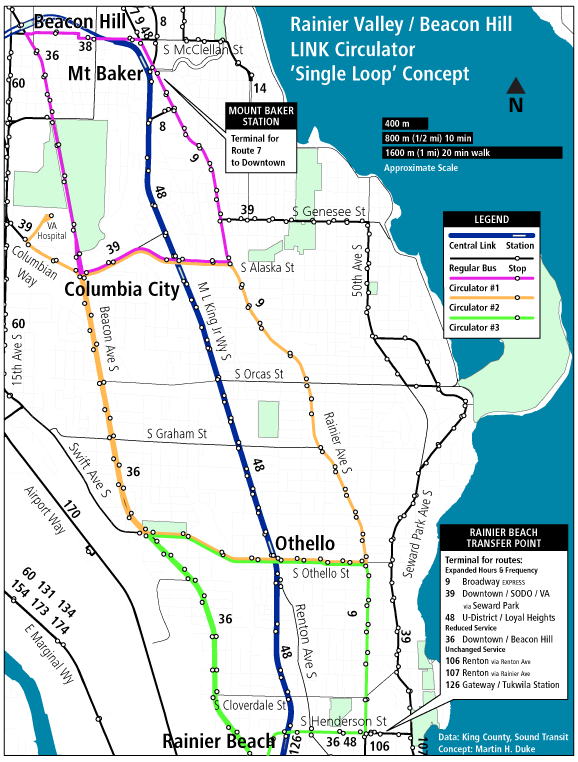 As you can see, the basic idea is that most service is replaced by three circulators that run between neighboring stations via Beacon Rainier Avenues. The caption has some mistakes, so ignore it. Key features:

I’d guess that each of these circulators would take no more than 15-20 minutes to complete a loop, so you could probably get away with 6 buses running simultaneously, one in each loop in each direction. When you effectively take out 2/3 of the runs of the 7 (the 7s become 9s) and 36, and all of the 42s, I think this probably pencils out, and maybe returns an operating surplus to the rest of the city. I’ve asked some sources at Metro to take a closer look at this. 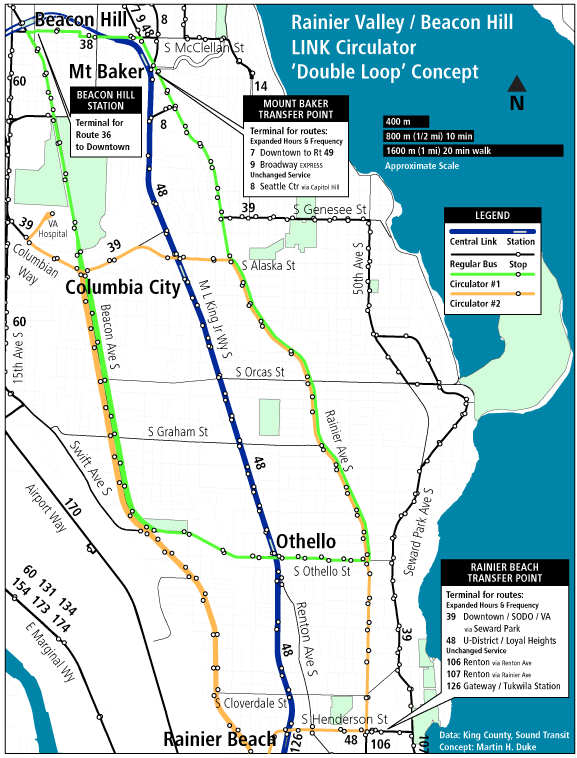 I think this is more elegant than the single-loop scenario because it enables longer one-seat rides. Like the single-loop plan, however, every bus stop in the current situation still gets service (no one loses service because of this plan). I’d guess that each cycle would take about half an hour, so you’d need two buses going in each direction to get 15-minute service intervals, which I’d target. Therefore, you’d need a total of eight buses simultaneously. On the other hand, this replaces basically all other routes in the Valley besides the 39, so maybe someone in the comments can report on how many buses operate in this sector simultaneously today.

I invite your comments on what is still just a particularly well-developed brainstorm. Too radical for an immediate rollout? Up your alley? Let us know.