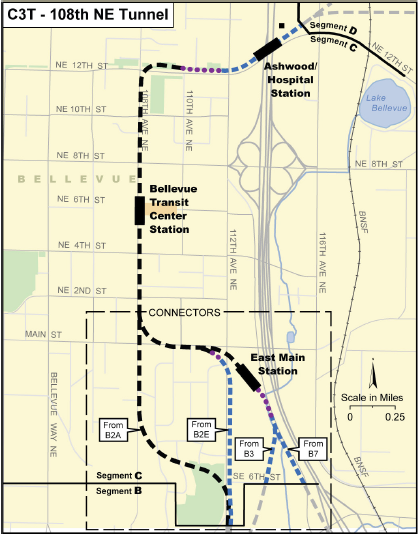 There is only one consensus for routing East Link through downtown Bellevue – almost everyone wants a tunnel. Unfortunately, few agree about which one. Only two of the many alternatives (PDF) came out of the public comment process with strong support – C3T (PDF), a bored tunnel running under 108th St and turning east on 12th, and C2T (PDF), a cut-and-cover tunnel running west on Main, up 106th, and east on 6th. Both tunnels surface as soon as they turn east. Also note that B3 and B7 are the big contenders for segment B, so the south edge of both C options look approximately the same.

It’s that surfacing where the trouble starts. C3T would require the demolition of a few houses, much like Capitol Hill station, and potentially displace a small office building next to I-405. C2T would close (and remove) the relatively new Bellevue Transit Center, relegating buses to various reroutes during construction. It would also permanently result in one-way, one-lane access to Meydenbauer Center, which I believe is Bellevue’s largest convention space. Meydenbauer’s front door would face an embankment and elevated light rail. The list of impacts continues – the plaza cut from the Galleria, temporary loss of the pedestrian walkway that replaces part of NE 6th… essentially, every pedestrian and transit amenity in downtown Bellevue would be torn up for the C2T option. 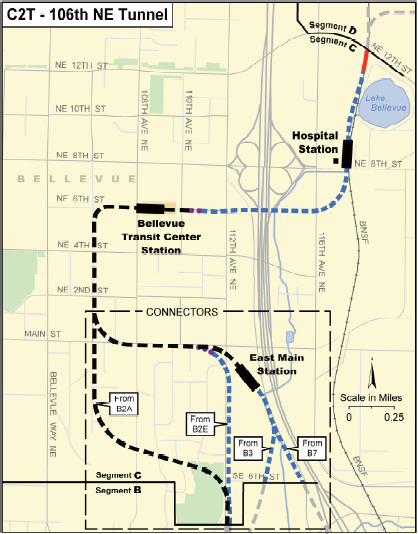 Station locations are also slightly different between the two. While both C3T and C2T have stations at the transit center, C3T would straddle I-405 with a station along NE 12th, serving the hospital, while C2T would instead put a station at NE 8th behind the Whole Foods – in the BNSF right of way. It’s not significantly farther from the hospital, but it doesn’t serve the new northeast downtown development – and that shows in projected ridership.

The numbers don’t pan out for C2T, either. The cut-and-cover tunnel meanders through downtown, resulting in an extra minute traveling through the segment. C3T will see several hundred more daily boardings than C2T largely as a result of that faster travel time – and I don’t know that those numbers take into account the recent explosion of Bellevue downtown development. C3T is projected to be $100 to $160 million cheaper, so those boardings are more cost effective, as well.

The Bellevue City Council, however, along with the Bellevue Chamber of Commerce, endorse C2T. I’ve heard two reasons for this: first, auto row is ripe for redevelopment – while downtown Bellevue has grown dramatically, the area on the east side of I-405 is largely parking lots and single story buildings, and I believe it’s zoned much higher than that now. The east downtown station could spur growth there. Second, it provides access to the BNSF right of way. This concerns me – the Port of Seattle doesn’t even have the money to buy it. Last year’s talk of a “plan” to run commuter service to Bellevue dried up with the election. As a region, we shouldn’t base our routing choices on pie-in-the-sky ideas.

The Bellevue Downtown Association put the alignment choices to a vote, and C3T won overwhelmingly – that seems more like the result I’d expect, and it’s where we stand as well. It’s going to be hard enough to fund a tunnel in Bellevue, and it’s a stroke of luck that the most cost effective tunnel option is also the cheapest, serving the most people, with the least travel time. With the understanding that funding for a tunnel is in no way secured, and that the board will also move forward a surface option that can be built with current funding, we urge the Sound Transit board to move forward with C3T.