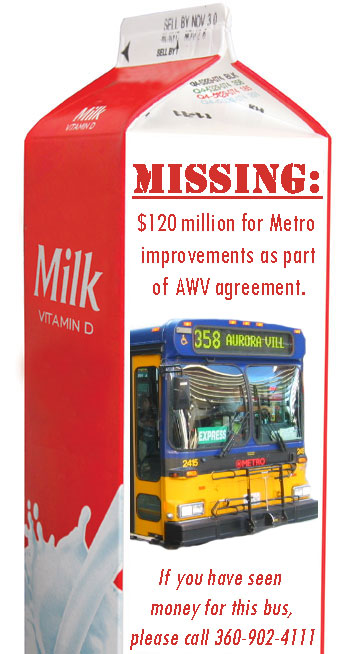 I want to start out here by saying that I write about and support transit because I don’t think our land use or transportation are sustainable. I didn’t start out as a subway geek – I started out buying organic and local, reducing my meat intake, replacing my lightbulbs, the basics of cutting my environmental impact. But over time, looking at statistics of what contributes to our emissions, I’ve realized that here in Puget Sound, where our buildings are mostly hydro-powered, transportation is by far the largest contributor to climate change.

Some of you know I don’t drive. I don’t even have a license, nor do I plan to get one. That doesn’t mean I don’t ever take car trips – I catch rides with people when they’re headed my way, or I’ll do a road trip. When I go to the store, a park, get groceries, catch a movie – those things I usually do on foot, or on the bus. I just try not to be absolutist – there are things cars are good for. Our urban form demands some car use sometimes. But that doesn’t make our urban form sustainable – it just means we’re in a bad situation.

None of the technologies to make cars ‘carbon neutral’ actually work at any scale. Sure, battery powered sports cars might be affordable for a few, and neighborhood electric vehicles might let us do last mile deliveries. But battery technology isn’t ‘advancing’ that much, and there’s no oil industry plot behind it, it’s just physics. When we have to generate our own power, rather than dig it out of the ground, most of us just don’t generate enough wealth to buy the energy it would take to drive us around.

I think, at this point, that most of us who are engaged and interested in these issues realize this. To survive as a species, we have to stop dumping carbon dioxide into the atmosphere. However neat they may sound, new ways of filling our gas tanks really don’t do that.

On the other hand, electric transit not only allows us to use clean ways of generating power, it also just takes a lot less energy to move people around, and that’s more the case the higher density we live in. Not everyone has to live in higher density, by any means, but a lot more of us do than are now. We’re subsidized into thinking everyone can live in low density – through highway spending, and through the unsustainably cheap energy we found underground. I’m no libertarian, but it was pointed out to me long ago that the market didn’t build cars until we had oil shooting out of the ground. Before that, we had electric streetcars. Only with subsidy did that change, and only by removing the subsidy can it change back.

There are no car-based fusion reactors around the corner. There are no algae ponds that can fill your gas tank at $2/gallon. And there are not very many years left of pumping your commute energy out of the ground, so the sooner we can all move past the idea that some piece of technology will be our savior, the easier the transition to a sustainable transportation economy will be. That transition can either happen when we have control over it, or it can happen when we eventually can’t afford gas – or when climate impacts cause major weather events.

This is where I’m coming from. This is why I fight. I’m sure I’m still a little out of the mainstream, but in the last decade, I think the mainstream has been coming to meet me. Next Thursday, for instance, the EPA is holding a hearing on carbon dioxide as a threat to human health. The phrase “carbon tax” has entered our collective consciousness, and our Mayor wants to use it to fund transit. There’s a sea change in acceptance that we’re screwing things up for ourselves, and a realization that we have to mobilize to change our course.

Just before this region gets a wake-up call that we have a better way, our local, regional, and state governments are coming together to subsidize the automobile for another century. They want to spend billions – including city money that could go to transit – on a new viaduct tunnel. It’s completely unnecessary – a study in 2006 showed that if we just tear it down, almost a third of viaduct trips will be replaced with local trips or eliminated entirely. It also showed that most Viaduct traffic goes to and from downtown, and here we are creating a new way to subsidize just the suburb-to-suburb trips, further diluting our city core.

On top of that – where the original Viaduct plan included $120 million for transit to help mitigate this reduction in capacity to downtown, the one to be signed today does not. Sure, it’s bus transit. It’s not perfect, it still uses diesel. But every time someone new steps on a bus, that’s another person who realizes we need more mass transit. And now, not only do we get a new highway through our city, we don’t get a penny for real solutions. We spend $900 million in city funds on what should be a state project. That money could build our streetcar system, or go toward real mass transit to Ballard and West Seattle. But we’re spending it so the state can build a new highway.

This has to stop. We have to convince our leaders that this isn’t the path we want to be on. The question is – how?

137 Replies to “A New Viaduct And No Transit”