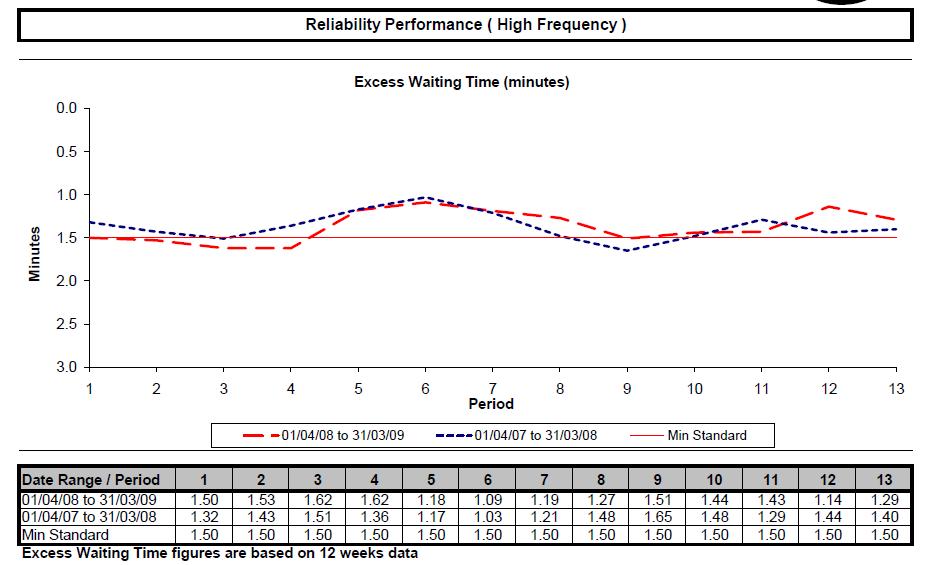 Greater Greater Washington has an outstanding piece up about how we measure bus reliability:

Every month, Metro’s customer service committee looks at a presentation on operating statistics, including a chart showing the latest bus “on-time performance” percentage. That percentage reflects the number of buses that arrive within a certain time before or after the published schedule — usually around 73-75%. However, on its own, this number doesn’t give management enough information to effectively maintain bus quality. In addition, it doesn’t capture important elements of bus performance, like bus bunching…

London looks at bus on-time measuring differently. Because the bus lines in London are operated by private contractors, it’s very important for the local transit authorities to accurately measure on-time performance because there are real financial incentives or penalties involved. They measure how often buses pass by certain points on the network and track the “excess waiting time.” All that time you have to wait for a bus that’s running late or is bunched with others is added up and averaged over the route, and the excess waiting is compared to how much you’d normally have to wait assuming you come to the bus stop randomly. The reports for bus performance are published on the web.

Do click on that last link to London’s bus reports (excerpt pictured above).  I think Sound Transit’s ridership reports are pretty transparent, although Metro’s are somewhat less so.  But this blows both of them out of the water.

Metro’s definition of “on-time” is between 1 minute early and 5 minutes late, tighter than WMATA’s standard of 2 and 7 minutes, respectively.  Still, they were able to achieve a 75% on-time performance (pdf) in 2007.  Sound Transit’s definition is less than 10 minutes late, which they’ve achieved about 94% of the time (pdf).

The point that GGW makes, though, that on frequent routes the actual service interval is more important than adherence to any actual schedule.  I know that neither agency’s staff is really looking for more things to do right now, but it’d be nice to start adding this framework for routes like the 3 and the 550.

On the other hand, adherence to this metric and this metric only would incentivize some odd behavior — like having some bunched buses simply idle for a while to fix the interval.  What’s better: making sure the wait at the stop is uniformly short, or preventing people from sitting on idle buses?