On May 20, Metro staff made yet another presentation to the King County Council Regional Transit Committee, fleshing out alternative strategies for service cuts. The slideshow is available online. (ppt)

Metro presented two service cut strategies to build on the six they presented in April (pdf). One is a “refined” option that emphasizes high-demand corridors and eliminates routes to many low-ridership areas, tweaking a previous proposal of this type.  The other is a kind of blanket cut, the “blended” option, which hits peak and off-peak service proportionally. Both envision cuts to each subarea in proportion to that subarea’s current allocation, in accordance with Metro policy.

The refined plan sees annual ridership drop from 109.7 to 95.2 million, a drop of 15.5 million, while eliminating 104 routes. The blended plan sees a drop of 20.5 million annual passengers and only eliminates 40 routes.  Details below the jump. 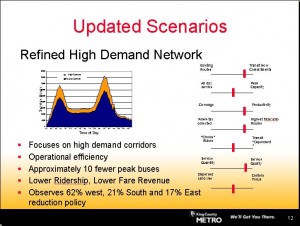 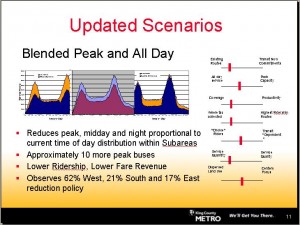 For the blended scenario, Metro first went through to cut by 50% -75% routes that have poor productivity, and eliminate those that duplicate ST service.  Next, slightly below-average routes got the same cut, and then slightly above average routes took a 25% cut.  To get an idea of how your route shapes up in the performance hierarchy, check out this 2007 route performance report (pdf).

In April’s meeting, Metro had presented a plan that focused cuts entirely on off-peak service to maintain congestion reduction benefits, and another that mostly cut peak service to preserve all-day connectivity.  Those were combined into the May “blended” plan.

Metro also looked at slowing down the Transit Now rollout.  In this variant, RapidRide and Service Partnerships (where a city or corporation chip in some of the cost) are untouched, but the “Developing Areas” and “High Ridership Corridor” elements of the package would slow substantially. Since these would be reductions in planned growth rather than cuts, they naturally reflect the 40/40/20 allocation of growth rather than the roughly 60/20/20 of cuts. That is, cuts in Transit Now implementation are a net shift of resources to Seattle.   Metro’s analysis, in any case, showed that eliminating the proportionality requirement netted only about 500,000 riders in the blended plan and 1.5m in the refined one. 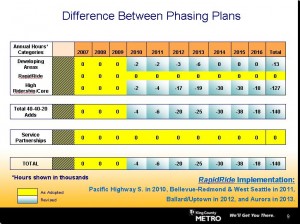 About 800,000 service hours have to go away. The entire TransitNow program is 590,000, and some of those are already implemented. Simply freezing all service increases will not solve the problem, and would anyway leave $25m in federal funds associated with RapidRide on the table.

The good news is that route productivity will increase, which is actually obvious when you think about it. When you cut, you cut the least productive routes. Indeed, one reason that Metro is “inefficient” compared to other systems is that there’s a lot of service compared to those systems.

The presentation ended on a downer, with a chart (below) showing that in 2016 we still won’t have the level of service hours of 2009. 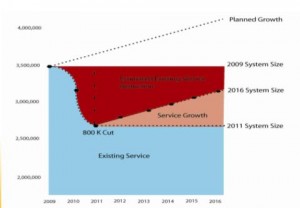