There’s an important distinction that’s being lost even by knowledgeable and intelligent observers such as Scott Gutierrez of the P-I, and some people on our own staff.

RapidRide is not the same thing as Transit Now.  Look at this slide from a May 20 presentation to the Regional Transit Committee: 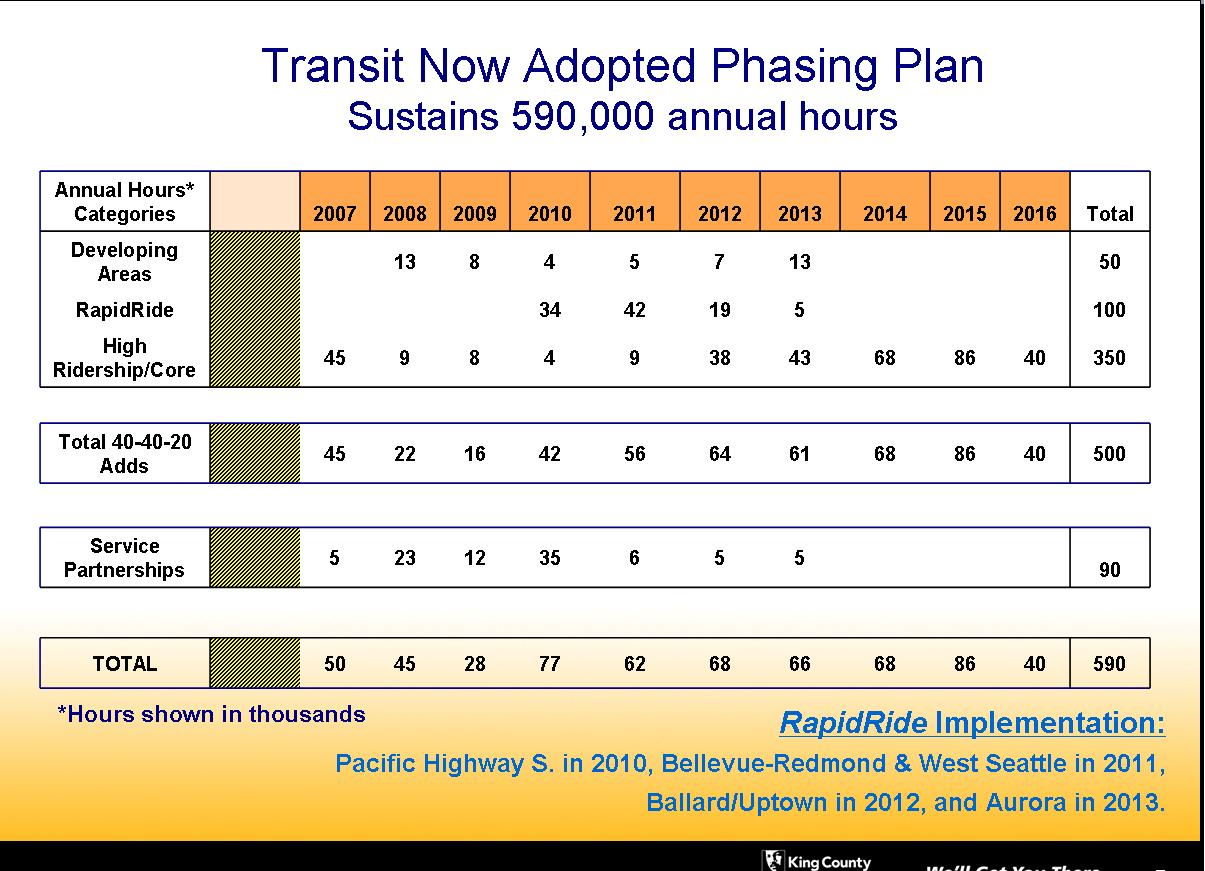 As you can see, the original Transit Now plan — the 0.1% sales tax increase — was planned to pay for 590,000 service hours.  Of that, only 100,000 service hours were devoted to RapidRide.  400,000 hours were for new conventional bus service both in “developing [read: exurban] areas” , and high ridership corridors.  As the chart indicates, these 500,000 hours were subject to the 40/40/20 formula.  Importantly, the RapidRide hours have some federal matching funds attached to them.

There’s a further 90,000 hours that come from “service partnerships,” where cities or corporations throw some cash (or capital improvements) into the pool.  The City of Seattle, in particular, has made extensive use of this to circumvent 40/40/20.

No one will propose to cut RapidRide or the service partnerships and leave the matching funds on the table.   The Triplett Plan wipes out all of the unimplemented “developing areas” and “high ridership/core” additional service.  The Phillips plan, and what I’ve called the “Council Plan“, instead treats Transit Now as a separate account.  Under these plans, therefore, instead of 590,000 service hours, the Transit Now extensions will amount to whatever 0.1% sales tax buys you, projected to be about 450,000 hours.  That’s plenty for RapidRide, partnership service, and a whole bunch of new service to boot.

It’s also important to understand that all the Metro budget deficit and cut estimates use the full plan as a baseline. The baseline plan has about 3.65m service hours in 2009 and adds about 200,000 a year after that, thanks to both Transit Now and various WSDOT construction mitigation funds.

6 Replies to “RapidRide and Transit Now”