[UPDATE 2: I received a link to this WSDOT document (pdf-see bottom of Page 3), which clearly depicts a highway with extensive bridge crossings.  Perhaps not an “elevated viaduct”, but I believe McGinn’s point about not having so many crossings stands.]

Viaduct day continues on STB.  This is getting really interesting. 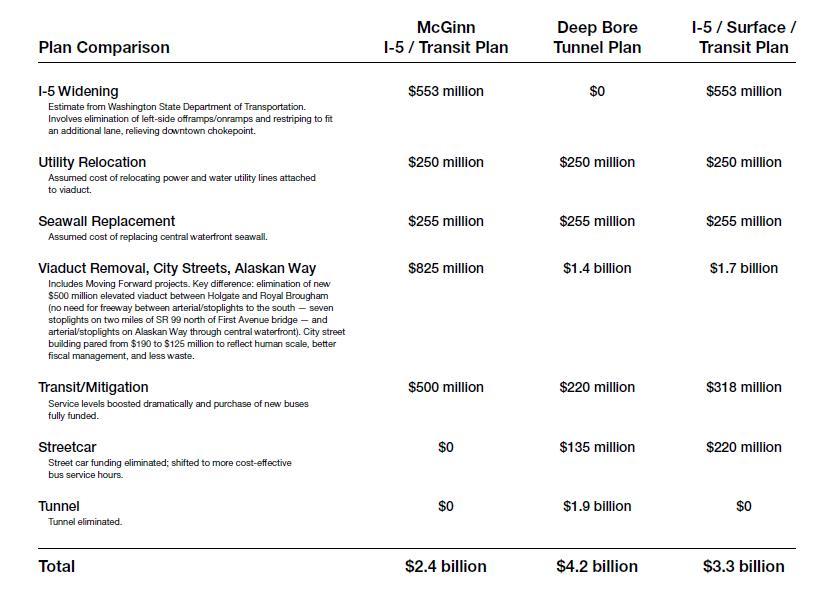 Mike McGinn emailed me with the details of his plan, which is different from the WSDOT surface/transit plan.  Key points:

The chart really lays out the differences more clearly, and is consistent with its own assumptions about what the State is willing to pay for.  If I read it correctly, the $300m Port of Seattle contribution would no longer be necessary.

Also from the email:

The biggest savings is, of course, not spending 1.9 billion (plus) on the deep bore tunnel.  But without a tunnel, we can reduce other costs on the Moving Forward projects.

Given the Metro funding crisis, I also don’t see financing a 1st Avenue Streetcar at this time.  I see streetcar expansion and light rail expansion in the city as desirable when we improve transportation financing regionally and statewide.

77 Replies to “The McGinn Response”