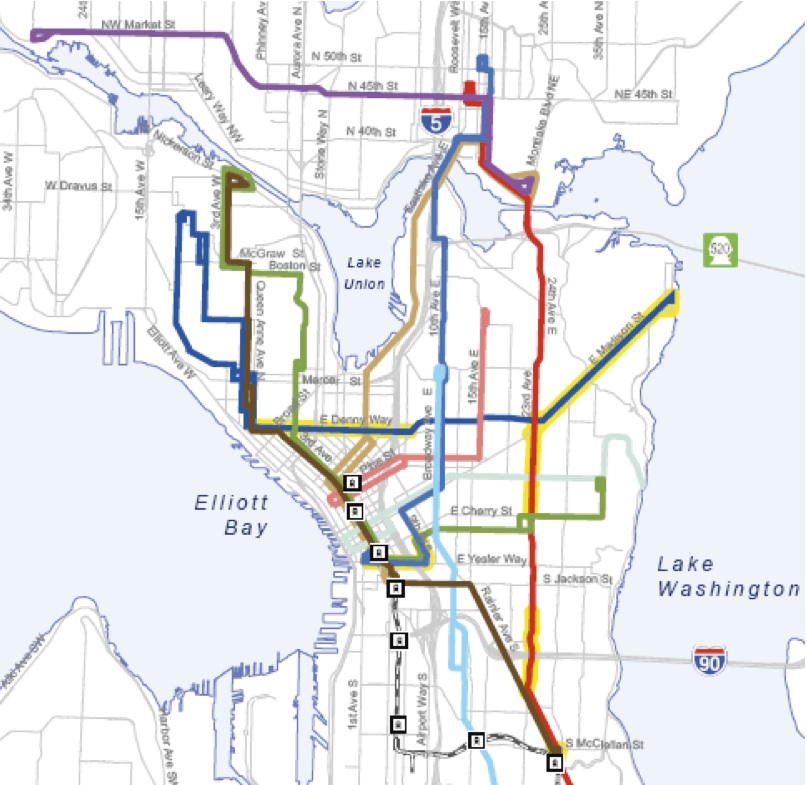 In the comments to this STB post on McGinn’s solicitation of ideas, one of the readers links to the rapid trolley network, an idea that was commissioned as a possible component of the surface-transit alternative to the Viaduct replacement.

Matt Fiske wrote about this idea in Crosscut back in March (I could’ve sworn I wrote about it, too, but I can’t find any reference in the archives).

Obviously the buses are run by the county, but Seattle can still play a fairly significant role in getting transit through the city more quickly. Indeed, the report lists them out:

Almost all of these fall within the city’s domain and would be a huge boon for in-city transit. Sadly, none of them are included in the report’s cost estimates. *

In fact, if the network had any hope of being “rapid,” you’d have to invest significantly in the street-grid bottleneck between downtown and Capitol Hill. Almost all of the proposed rapid routes — much like the current routes between Queen Anne/Belltown and Capitol Hill/CD (2,3,4,8,10,11,12, etc.) — would waste a ton of time getting from one side of I-5 to the other, especially during rush hour. Finding a way to prioritize crosstown transit between, say, 5th Avenue and Broadway would be a big help.

* The report does calculate $142M in capitol costs for new trolley wire, improved stations, new fare collection systems, and a new electrical substation. Street improvements are outside the scope of the analysis.