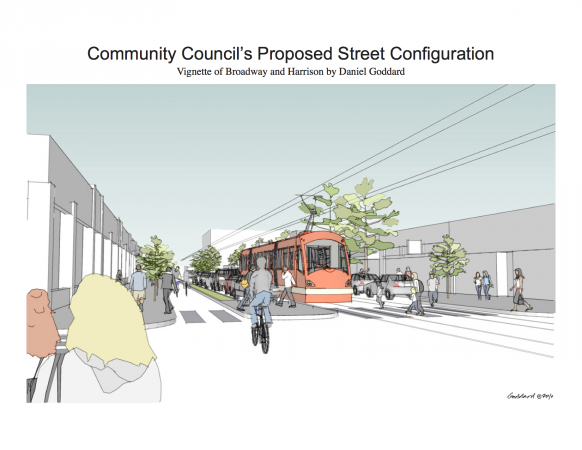 At a public meeting last Thursday, the Capitol Hill Community Council released their preferred alignment for the Captiol Hill section of the First Hill Streetcar. Unlike other proposals which would split the route between Broadway and either 11th or 12th Ave., the community council recommended keeping both directions on Broadway north of Union. The proposal, outlined in a memo sent to SDOT and the Mayor’s Office, also includes a separated bike path, and encourages an extension of the line north to Aloha St:

After broad outreach and discussion, the Capitol Hill Community Council has come to three key recommendations for the northern segment of the First Hill streetcar:

Also at the meeting, Ethan Melone from SDOT presented the different alignments currently being considered by the city. Although a two-way broadway option is being considered (in addition to various couplets), the current proposal from the city has the streetcar terminating on Denny between Broadway and 10th, which raised concerns from members of the community who are hoping to permanently close this section of the street (currently closed for the next six years for U-Link construction) and turn it into a pedestrian plaza as well as a permanent home for the Broadway Farmers Market. Concerns were also raised that this would preclude an extension north to Aloha.

The Seattle City Council will make a final decision regarding the alignment in April, and construction is scheduled to start in fall of 2011.

[UPDATE 12:25 PM: Tony Russo from the Capitol Hill Community Council sent in an updated version of the memo PDF linked above, containing “minor (mostly cosmetic) edits”. The link above now points to the latest version of the document.]