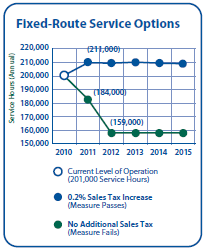 Thurston County, like everyone else, is conducting its primary election on August 17th. On the ballot, notably, will be a sales tax increase for Intercity Transit from 0.6% to 0.8%, just short of the statutory maximum of 0.9%. The tax would only apply to, and only be voted on by, the Public Transportation Benefit Area (PTBA) of Thurston County, basically the urban areas.

The revenue predicament of Intercity Transit should by now be familiar. Tax revenues are down about 13% from 2007 levels. The agency has already cut some nonessential programs and raised fares, and is now facing a 9% cut in February 2011 and a further 14% in 2012.

Likely 2011 cuts include, according to this handy fact sheet:

If the measure passes, all current service while remain, plus a modest 4% addition:

The vote is going to depend on turnout. If transit-dependent populations, in particular college students, mail in their ballots in bulk, it will pass.

28 Replies to “What’s at Stake in Thurston County”