[Update: To be clear, Metro would have to add at least a few stops on the 9. I don’t think the impact is big enough to alter the math.]

Although Metro executed a pretty major service revision in Southeast Seattle in response to Link’s opening, that change manifestly failed to provide frequent, efficient worthwhile Link connections to the great mass of people east of the line, particularly in the Rainier Avenue corridor. The, 7 one of the system’s workhorses, was left essentially unchanged and does not provide a transfer opportunity until it reaches Mt. Baker, by which time the transfer is essentially a wash time-wise. If that weren’t bad enough, the transfer from transit center to Link station there is a difficult one. 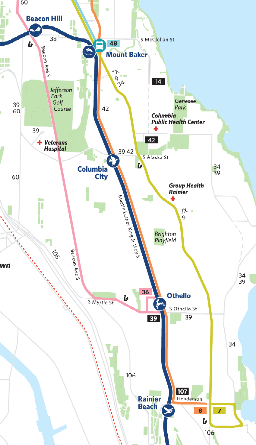 Aside from the core mission of serving the stations, connectivity within the Southeast hasn’t improved. Unlike more radical plans like my double-loop circulator proposal, trips between the dense, linear corridors along Beacon and Rainier Avenues can still involve three bus trips, with headways as long as 45 minutes.

Oran’s frequent service map (detail at right) illustrates the problem very well. Frequent service is siloed into three parallel corridors along Beacon, MLK, and Rainier. There is no frequent east/west connectivity at Columbia City, to the west only at Othello, and to the east only at Rainier Beach. If you live near, say, the Group Health on Rainier, forget it.

However, there is another alternative that roughly maintains the operating costs in this part of the city while improving the situation for most commuters. I have neither the ability nor the inclination to do a full service-hour analysis, but I will estimate the number of simultaneous buses necessary to operate each route during midday operations to show that the changes roughly pencil out.

You always have to give up something to get something. Disadvantages include:

Figuring out what to do with peak express buses is an exercise left to the reader. Evenings and weekends, there are fewer existing service hours to be reallocated. I would place the emphasis on maintaining 15-minute headways on the 9, which provides mobility along Rainier and a two-seat ride to downtown with a transfer at Mt. Baker, and maintaining lower frequencies on the new 34, 39, and 36 extension.