Amtrak Cascades set another ridership record in 2010, boarding 838,251 passengers.  This represents an 8% increase over the previous record set in 2008 (774, 531).  Economic recovery, the 2nd daily train to Vancouver BC, and the Vancouver Olympics all drove the increased ridership.  It was also an active year on the policy front.  Washington won a battle with the Canadian Border Services Agency (CBSA) regarding customs fees for the 2nd train, and the federal government increased Washington’s HSR stimulus funds by 32%, from $590M to $782M.

Directly gauging the impact of the 2nd Vancouver BC train is difficult. WSDOT only began publishing station on-off data in February 2010, so year-on-year comparisons will be possible beginning next year.  Rather, increased ridership must be inferred from ridership growth on Trains 513 and 516. The first graph below shows a clear spike in ridership when the 2nd train began on August 19 2009, and that this year-on-year growth sustained itself through August 2010. The 2nd graph shows Vancouver BC now assuming its expected place as the 3rd most popular station, overtaking Tacoma. 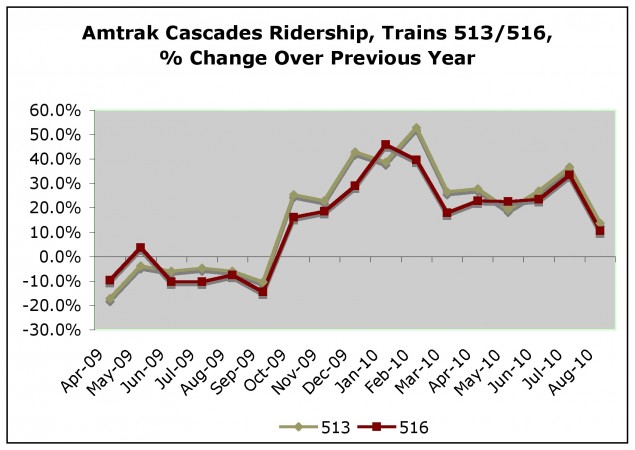 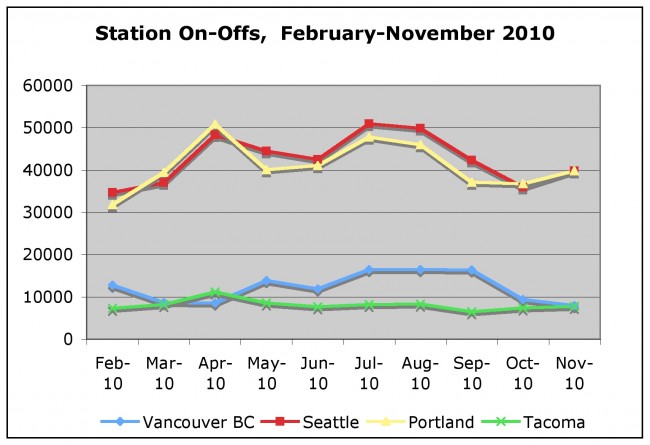 As a frequent Cascades rider and supporter, I should be elated by these ridership figures.  Yet my enthusiasm is muted by the fact that service levels remain too infrequent, on-time performance remains poor, and reliability in the winter is awful (service north of Seattle has been cancelled 14 of the last 39 days due to mudslides).  While I appreciate that living in a lush, rain-fed region comes with the risk of mudslides, it is disappointing that WSDOT’s Amtrak Cascades Long-Range Plan makes almost no mention of mudslide-related reliability issues.  Though I welcome our push for higher-speed rail, I propose a simple rule-of-thumb for project prioritization:  fix the bad before improving the good.

Still, long term, be bullish on Cascades.  When the stimulus funds have done their work, when King Street has been fully restored, when the Point Defiance Bypass has traded scenery for needed reliability, and when we start to see those extra frequencies, we will at last have some of the best rail services in the country.

60 Replies to “As Cascades Sets Another Record, A Plea for Reliability”