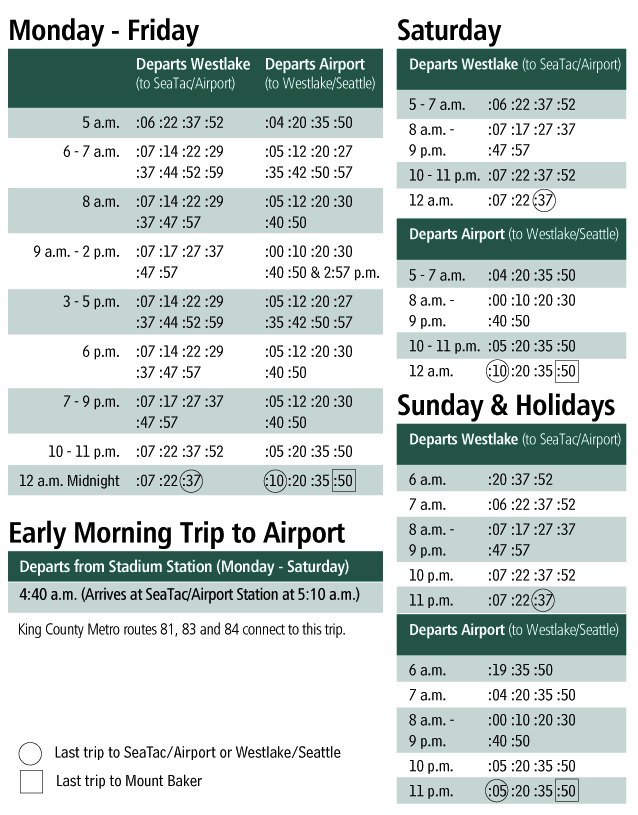 Here’s another variation of my Link stem-and-leaf schedule. If you looked at that schedule closely, you will see a consistent pattern to the departure times. Trains are always spaced at scheduled headways (7.5, 10, 15 minutes), even at transition points between peak and off-peak. You will see that trains depart Westlake for the airport “on the sevens”, at 7, 17, 27, 37, 47, 57 minutes past the hour, during off-peak hours and almost all day on weekends. Since the schedules rarely change and are simple enough, they are easy to memorize and communicate to others.

Realizing that, elements of this design could be simplified further while providing more details than the current Sound Transit presentation. Though the template for this was the schedule book, I think this would be more suitable for station schedules. The schedule book needs to have the timepoint-based schedules in addition to the basic summary.

The schedule data for my mockups came from One Bus Away. That may soon no longer be possible, as commenter Tim, suggests:

In the future, expect One Bus Away to show headways instead of exact times. (If available) real time information will help decide what time to add the headway information to. Example: 08:00 and the line runs every 10 minutes. With no real time available, schedule will show 08:00, 08:10, etc. With realtime available, and assuming the last vehicle passed at 08:02, you’ll instead see 08:02, 08:12, 08:22, etc. That is assuming that the operating agency plans on keeping headways and not schedules.

Eventually Sound Transit and Metro will no longer supply schedule data for both RapidRide and Link.

Let’s hope that both of them get their real-time arrival information systems in working order before deciding on pulling the plug.