Seattle’s ongoing Transit Master Plan process* is designed to provide a list of transit spending priorities for the City of Seattle and should conclude in September 2011. In general, Seattle’s role is to fund capital projects like bus lanes, streetcars, and queue jumps; the TMP is not an attempt to redesign Metro’s route structure, and building infrastructure for routes that Metro is unable or disinclined to serve with high-frequency service would be silly.

The first step of the study, just completed and briefed to the Council’s Transportation Committee yesterday, established the quantitative criteria for scoring dozens of potential investment corridors**. Criteria were focused on current and potential ridership, current and future density, and social justice considerations. Overall, my personal impression was that corridors that connected dense and walkable neighborhoods generally tended to score the highest.

Stage I of the study selects the top 15 of these corridors for further analysis. Depending on how the precise corridor ranking plays out, the study will evaluate the most promising five or so of these for high capacity transit like BRT, streetcars, or light rail. The remainder will receive smaller-scale investments that can make buses work better. The 15 finalists are depicted in the map at right.

In a separate part of the study, Nelson/Nygaard will analyze circulation in the downtown core, hoping to make the system more usable and legible. The map below (the jump) indicates the areas of focus, fairly congruent with the inner parts of the trolleybus network. 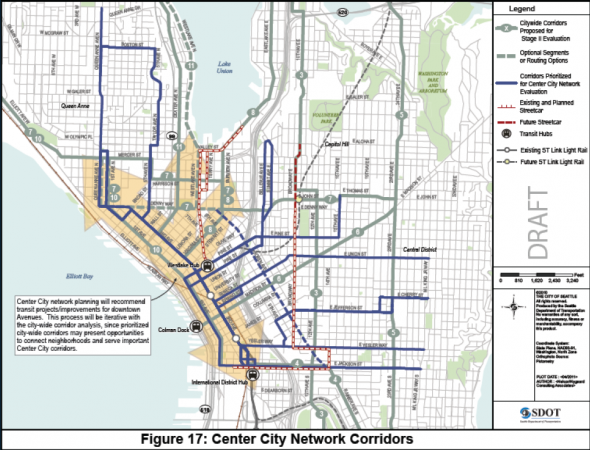 Once the transit master plan is complete, it’s up to an entirely different committee (and, of course, elected officials) to determine what projects the city fund in the near to medium term using existing taxing authority, and to put a well-crafted measure on the ballot, presumably in fall 2012.

* for which I serve on the volunteer Advisory Group, although any opinions or implications here are purely my own.

** these do not necessarily correspond to individual Metro routes.