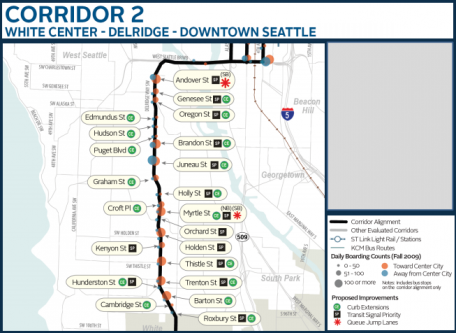 Now that I’ve beaten to death Seattle’s options for its three high capacity transit corridors (plus two in the center city), it’s time to look at what the other 12 corridors might look like in the Transit Master Plan.

SDOT and Nelson/Nygaard have not completed the plan, but they did brief the City Council on an example treatment, West Seattle’s Delridge corridor (slide 14). For a mere $1m in capital costs and $5m in annual operating costs, these street improvements could bring 2030 ridership to 6,600 per weekday, for a net increase of about 1,000.*

The cumulative changes save about 1.7 minutes on a typical trip end-to-end.

* Note: Nelson/Nygaard confirms the slide from which I got these numbers has a typo. The “annualized capital cost per ride” is not $35, but about 10 cents.

9 Replies to “The Delridge TMP Corridor”