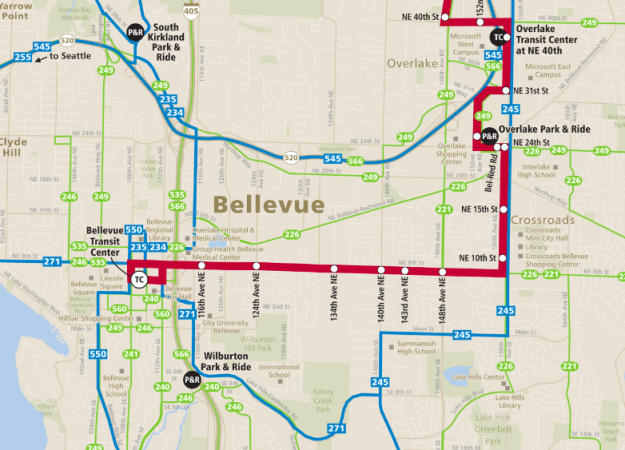 Metro put together a decent map showing the improved Eastside frequent & all-day transit network, featuring the RapidRide B Line, that will begin service on October 1st. Metro will be distributing these maps as a “pocket guide” to the Eastside transit network. The other side has a frequency chart and list of connections to major destinations on the Eastside, plus park & ride locations and fare information. This is a good initiative from Metro to promote its new and improved service. I hope to see these maps in the hands of as many as possible and that these maps be posted at the Eastside transit centers for all to see.

This map uses a similar color scheme to the Spokane transit map. The RapidRide B Line stands out as the Eastside’s main transit route with a thick and dark red line. Frequent service (every 15 minutes most of the day) routes are a thinner light blue. Other all-day service (every 30 minutes) are an even thinner light green. Peak-only routes are not shown. I printed it on an 8.5 x 14 inch sheet of paper from a monochrome laser printer and was able to read the map, even though the background colors and tiny streets were washed out. The green is a little too light, almost blending into the background.

Unlike Spokane’s schematic map, this is a geographic based map produced from a GIS. Metro wanted to show the underlying street grid which is helpful on the cul-de-sac dominated Eastside where walking to the main roads isn’t as straightforward as it appears. There are different intentions here in the role of each map. Spokane is creating a hierarchy of maps with a simplified system map providing the big picture and the route map providing street block level detail (also compare with Community Transit’s route map). While Metro has done the opposite with a big detailed map and simplified route maps, the one big map is all you need.

I can see Metro taking this style and quickly adapting it to the system map and expect them to produce something similar for Seattle when the C & D lines launch next year. It’s nice to see Metro finally getting maps done right.

Metro doesn’t provide a link to print or download the map but I found the source images for the map and the information tables. Warning: they are very large 2-3 MB image files.

As for my Eastside transit map, I’m still working on it. I’m going for a schematic to see how that’ll work compared to this map.