Ben’s report on bringing forward ST3 planning money should assuage a lot of fears that Sound Transit’s resources are being diverted to something less than Link-standard rail. Federal funding requires an alternatives analysis, which may as well leverage the resources Seattle has gathered. The wording of the McGinn Amendment up for consideration tomorrow by the ST Board shouldn’t stir panic.

However, a lot of reporting on this story has focused heavily on application to the Ballard-Fremont Rapid Streetcar. I don’t see this planning as primarily about rapid streetcar, but if any actors are intending this to be the new focus for Sound Transit, that would be a mistake.

In Seattle, the ST2 package promised study of three corridors: downtown-West Seattle, downtown-Ballard, and Ballard-UW. If construction is to begin before the ST1 bonds get paid off in the 2030s, it’s going to require legislative action.  Although no one knows for sure how big of a package the state might authorize, the region’s other goals are Downtown Redmond, Issaquah, Everett, and Tacoma. This implies scope for North King County in the billions of dollars. For Sound Transit, then, extensive tunneling is a viable option. 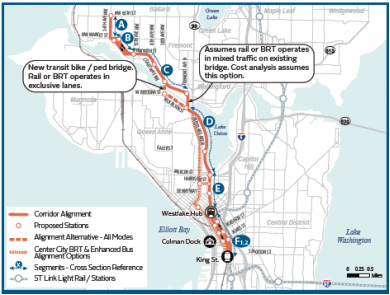 Seattle’s Transit Master Plan, in contrast, is scoped to reflect Seattle’s relatively meager funding capacity, and does so beautifully. Limited to Rapid Streetcar, the entire High Capacity Transit plan amounts to about $700m — less than the returns from a 30-year $80 tab fee at $810m. The plan skipped over the Interbay corridor largely because it would likely be duplicative with Sound Transit*; there is insufficient right-of-way to do anything rapid for Ballard-UW without a  tunnel the city can’t afford on its own. The TMP is a complement to the long-range Sound Transit plan, not a replacement for it or a guide as to where ST should go.

* Ballard via Interbay isn’t actually a done deal. The monorail project probably picked the right corridor, but with enough data I could certainly be convinced an alignment through Fremont is superior.