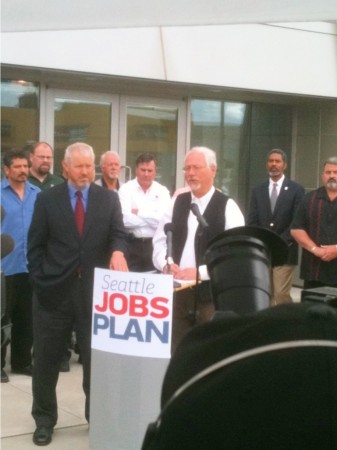 Conlin on Land Use: Will he focus less on building height, and more on density?

There is plenty one can find wrong with Richard Conlin’s latest blog post about the zoning battle in Roosevelt. But there are some good things to be said for Conlin’s post: he’s recognizing that land use decisions shouldn’t rest only in the hands of neighborhood planners and he’s ready to dispense with height as the measure of good land use policy. That’s good news for the New Year. But first let’s cover some ground opened by Conlin’s post.

Conlin decries the overheated rhetoric of the debate, flashing his credentials as a Solomon in the Northwest style. Conversations ought to be polite and fact based, Conlin implies, and it’s up to politicians to discern the facts and the law and make good decisions. Rhetoric, overheated and bloated, from bloggers isn’t helpful. Conlin suggests that the Council’s job is to find the middle ground between two extremes, dividing the baby between NIMBYs and density advocates.

However, while compromise is beneficial in policy discussions there can be no compromise between fact and fantasy. The facts are in on density: it’s better than other patterns of development and growth, specifically sprawl. Furthermore the facts point to the importance and benefit of density to many things people care about, like jobs, water quality, air pollution, public safety, jobs, and economic development to name a few.

The fantasy subscribed to by opponents of the up zone is that “taking” more density than the Mayor’s proposal makes them pro-density, and thus immune from the charge that they are intent on scuttling Sisely’s project because they can’t stomach the idea of him making a profit. The supposed supporters of density were willing to amputate their noses to stop an up zone, even though the properties are doomed to stay blighted without one, a truth that Conlin’s colleague Nick Licata admitted when he proposed his amendment which would have limited the construction of more housing in Roosevelt.

Conlin argues both sides of the zoning discussion in Roosevelt are on equal rhetorical footing, as if finding an answer to the question “what is 2 plus 2” is open to reasoned debate. Those of us who are pro density (supporters of the answer “4”) were pushing for too much height, and those against (supporters of the answer “3.75”) were missing the point and benefits of density. The truth is in the middle of those positions, Conlin seems to say: maybe 3.875?

Conlin was in the overheated auditorium when the proposal to increase heights on the properties owned by Hugh Sisely was publicly eviscerated by a frothing mob in Roosevelt. Does he really believe that what was on display that night from opponents of the up zone was the same as those of us who wrote blog posts and articles in favor of height on that site? Were we shouting down the people who were bashing developers and “outsiders” trying to ruin their neighborhood?

The truth is the 65 feet on the Sisely property is lower than it probably should be. The market would likely support a lot more housing there and throughout the neighborhood. And that brings me to two hopeful points that I hope Councilmember Conlin will consider as his New Year’s resolutions: don’t raise neighborhood expectations about the influence they will have on zoning and stop worrying about height.

Conlin suggests that the City’s process was “botched.” He’s right. Highly trained and qualified planners and staff at DPD ended up using their skills to transform narrow prejudices about developers, growth, and Hugh Sisley into land use policy. Conlin is right to suggest in his post that this use of City resources is a bad idea. Local neighbors down the block from transit stations should be included, but their voices and opinions shouldn’t be given more weight simply because of their proximity. And success of land use policy and regional transit is too important to be left to local interests about view blockage of one building, like the high school in Roosevelt.

Second, Conlin wisely suggests that this discussion isn’t about height. Amen! Density and height overlap, but the two things aren’t identical or synonymous. Density simply means more people living in a smaller footprint, and height, naturally, is part of accomplishing that. But putting more people into single-family neighborhoods by allowing more cottages, duplexes, and other multifamily options in and around single-family neighborhoods does the same thing. So does dense Transit Oriented Development. Believing height doesn’t matter frees us from obsessing about 40, 65, or 85 feet. Who cares how tall the building is, the question is are we making room for lots more people to live near transit?

If the Council is going to examine wholesale changes to the code around transit why not eliminate height based zoning restrictions all together around light rail stations. If height doesn’t matter than land use planning and regulation should allow the neighborhood, transit advocates, and investors in development to decide what gets built whether it’s 100 or 1000 feet tall, as long as it substantially and sustainably supports growth.

Conlin as chair of the Council’s land use committee should always remind neighbors that they don’t matter more just because they live near a project. He could also resolve to affirm that height doesn’t matter, but people do. Finding ways to put more people next to things that make life easier (like transit) and more affordable is our goal, not enforcing arbitrary height limits. I’m looking forward to Conlin in his new role as land use chair fulfilling these promises.

46 Replies to “Richard Conlin on TOD: Two Resolutions for the New Year”