What might happen if we got rid of the code one mile around Beacon Hill, stopped worrying about heights, and, instead, focused on what’s happening on the ground there and wrote a code that reflected that potential? I’m not sure, but when the inevitable criticism came in for my Zero Based Zoning idea for the Beacon Hill station area, I started to wonder, “Maybe a mile is too big of an area around a station.” But after an extensive walking tour, I think a mile is just about right, and there is strong foundation there upon which to build the future.

My drawing skills are certainly not great, but while I was walking and looking at maps here’s what I sketched out. (click here for the big version). 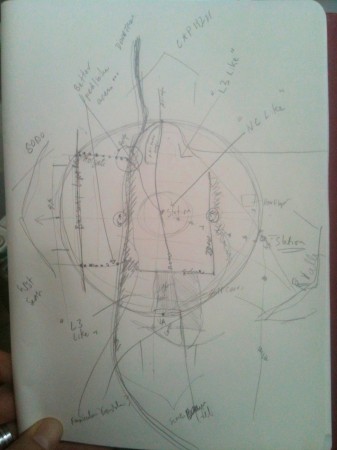 In the center of the bull’s-eye, of course are the station and the commercial district. The circle is roughly a mile from the center out to the edges. As one commenter pointed out, the circle does include seemingly incongruous neighborhoods. But as I experienced the area on foot (I also live there for 10 years) it became easy to see that there are some important reasons to consider such a wide circle.

Zero Based Zoning is a concept like form based code except that it doesn’t start with a code at all, but a process. Can we consider a neighborhood without limits but only potential? Can we stop worrying about adjusting heights, bulk, and scale of buildings in a neighborhood, but consider instead what could happen there with more people? Here’s my view of Beacon Hill with no code, only experience an open mind about what could happen there with the station holding it together.

Perhaps the easiest part of the thought process is the commercial district surrounding the station itself. Much of this area can and should support substantial mixed-use development. The only limits for a quarter mile around the station ought to be financial feasibility. The Red Apple could easily support a larger development, as could some of the surrounding blocks. I would imagine a dense, built out core that would look a lot like parts of downtown, Belltown, or First Hill.

A kind of keyhole shape of single-family residential surrounds the core, bounded by Jefferson Park on the south, steep green belts on the east and west, and the Jose Rizal Bridge on the north. This entire area should look a lot like Capitol Hill’s huge swaths of L-3, low rise, multifamily with some single family mixed in. Most of Capitol Hill is quiet, with a residential feel. True, there a lot of people there, but most of the housing is 4 to 12 units, a perfect way to transition Beacon Hill’s single-family neighborhoods around the station into density, and a huge economic opportunity for current property owners who could convert their homes into townhouses, fourplexes, and backyard cottages. Everyone in the keyhole would become a small scale citizen developer overnight.

The North: Gateway to Little Saigon and Capitol Hill

The north end of Beacon Hill winnows down to a point, which makes the Pacific Medical Center Building an iconic gateway to the neighborhood. It’s hard to improve on what’s already there, but for many years there has been an interest in a better link to Little Saigon and 12th and Jackson. I don’t have any good answers, but it’s probably time that the entire Pac Med building campus come back into the public realm, unless a way can be found to turn it into housing. Most of the north end of Beacon Hill looks like parts of Capitol Hill, so it may not be an issue of adding more people, but reducing crime and promoting walking across the bridge.

One commenter was flabbergasted that my mile circle included the industrial area, an understandable reaction. But when I lived on Beacon Hill and biked to work every day my route took me right down Holgate and onto 4th. I even used to walk that route. And don’t forget that while there is a firm, clear, and excellent edge to the neighborhood there, it doesn’t mean there can’t be connectivity and improved access for bikes and pedestrians to the bus way and light rail on 6th. Holgate and Spokane could be great pedestrian and bike gateways between Beacon Hill and everything west, including the stadia, light rail, bus lines, and maybe even the Sounder.

And how about a gondola or a funicular between the edge of Beacon Hill and the base to facilitate this? There is already a piece of the Mountains to Sound Greenway that stops right at the top of the Holgate Bridge. The west side of Beacon Hill has a firm edge, but it doesn’t have to be a brick wall.

And speaking about gondolas, why not have one connecting the Beacon Hill Station and the Rainier station or Franklin High School? I know, I know, pointless from a pure transit perspective, but it would be a great connection bridging the steep incline for bikes and pedestrians going up the hill. Like Little Saigon, most of Rainer Avenue is still far away conceptually for residents of Beacon Hill not so much because of actual distance but because of the steep climb. There might be better ideas for where the gondola might go, but something to open connections to Rainier Avenue, in addition to light rail itself, seems important.

Big institutional buildings anchor the north and south of the circle, the south end’s being the Veteran’s Administration Hospital. But what give the south part of the circle its charm are Jefferson Park and the golf course. This amenity in the middle of an increasingly dense neighborhood is a huge selling point for families and older residents too. The important analogy here is also to Capitol Hill and Cal Anderson Park. Cal Anderson is also a lidded reservoir, and it functions as the front yard for thousands of people who live in apartments and condos in Capitol Hill. The best way to keep the park and golf course alive is to fill it with people either who live nearby or who light rail, gondola, bus, or funicular onto Beacon Hill.

Getting to what we want, not avoiding what we hate

I’m no planner, and gondolas, on the surface, have nothing to do with land use. But that’s the point. Far from being undemocratic or driven from the top down, Zero Based Zoning is an effort to do what people like Tim Burgess and Peter Steinbrueck have suggested more than once: turning our land use code into incentives that promote what we want, rather than an accretion of rules to prevent what we fear. Zero Based Zoning has only one quantitative outcome, more people in a smaller place. How we do that in a sustainable, livable, and affordable way is up to us, not a code.

Below is a 3-D fly-over view of part of my walk up Beacon Hill from 4th and Holgate, a cool feature of Map My Run.

65 Replies to “Zeroing In On Beacon Hill”