This is Part 1 of a series.

Just as we each have a carbon footprint, we each have a land footprint. A three person household in a home on 6,000 sf of land (including half the street in front of their home and half the alley) takes up 2,000 sf each person. As the average land footprint decreases, the square footage each person lives in might even remain the same as one story houses go to two or as two story apartments go to six, but the distance they have to walk to the store is lower. In addition to being more walkable, areas with smaller average land footprints can have better transit, pave over fewer forests and farmland, require less roads, sidewalks, sewer lines, electricity distribution, etc.

Using US Census data, we can see what kind of land footprint distribution an area has. This can tell us the most common living conditions in an area, and allows us to see how far apart people live in that area. This can also be helpful in comparing land footprints of different cities. Simply dividing the land area of a city by the number of people doesn’t work, since city boundaries are different and politically defined.

Below is what I’m naming a residential land footprint curve. The smallest geographical elements the US Census publishes data for is called a “block”. In cities these are often physical blocks bounded by streets, and outside of cities geographical boundaries are generally used. The Census Bureau has divided the US into 8.2 million blocks. All I’ve done is taken data from Seattle’s metropolitan area (the census definition is: King, Pierce, and Snohomish counties) and sorted the number of square foot per person in each block into “bins” of 100, then plotted the number of blocks in each bin. For example, there are 2 blocks in Metropolitan Seattle that have a density of between 0 and 100 square feet per person, 15 blocks between 100 and 200, 29 between 200 and 300, etc.

This curve allows us to easily identify the land footprint characteristics of a metropolitan area. For Seattle we can see that the most common living condition is around 3,800 square foot per person. Below that there’s a fairly linear distribution down to the densest blocks. This is mirrored above 3,800 until we reach around 7,000, where we start seeing a more gentle decrease. Few “blocks” (however they’re defined in rural areas) have 40,000 or more square foot per person inside our metropolitan area, but they do exist (I’ve truncated the chart to keep it readable).

In my next post in this series I’ll compare Seattle’s land footprint curve to curves from other cities. 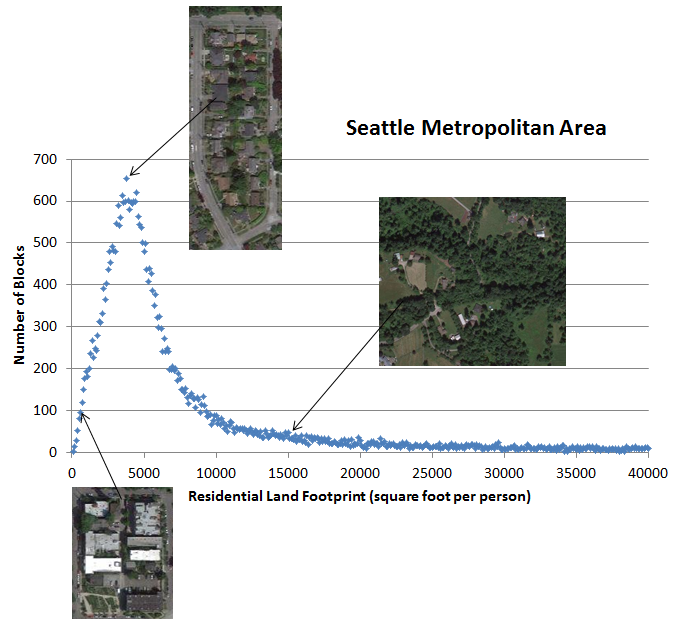 41 Replies to “Land Footprint – an Introduction”