This is part 2 of a series.

In the previous post on this series, I looked at the idea of a residential land footprint – the amount of land each person takes up for their home.  I also created a chart (updated here) that shows the different living conditions in the Seattle metropolitan area.

The best use of this land footprint curve is to have an easy way to compare the land use of our region to other regions.  I chose five metropolitan areas that I thought would be interesting to compare to Seattle.

New York City stands alone in the US with regard to land footprint.  The average person uses far fewer square feet of land.  This is accomplished by stacking residences, allowing more people to share the same amount of land.  Note that peak of 300 sf per person might be uncomfortable in a single-story world (keep in mind this includes your share of yard, street, and alley), but by building up each person can have as much floor space to live while using the same amount of land.

I was surprised by these two.  I had imagined Los Angeles to be more sprawled the San Francisco, but they have very similar curves.  It’s interesting to see where the curves cross – SF has more very dense construction, then the curves cross at around 500sf/person.  LA has more moderate density units, and at around 4,000sf/person they cross again, leaving SF with more spread out housing than LA.  Of course, LA’s metropolitan area only includes LA County and Orange County – and the sprawl I always think of extends beyond these areas.

Portland and Seattle are similar.  Seattle has more dense housing, Portland had more mid-density housing, and they align again as housing spreads out.  However, the most common living condition is significantly more dense in Portland than Seattle (~3,000sf/person vs. ~4,000sf/person).  I had included Phoenix just to show what I thought of as a large sprawling city, but was surprised by the curve.  Yes, Seattle has many more people living 2,000sf/person than Phoenix, but Phoenix peaks near Portland at 3,000sf/person then stays lower than Seattle up through the higher footprint homes.

Comparing Seattle to these five cities, it’s clear that we have a large land footprint.  In the most common living condition, a Seattlite takes up a tenth of an acre for their share of their home alone.  Add in the roads and freeways to get to your home (road area likely increases with land footprint), your children’s school footprints (there aren’t many multi-story schools around here), your workplace land footprint, the footprint of your grocery store, and we’re talking about a large amount of land per person.  This is wasteful of our forests, our farms, and increases the distance and time needed to travel to any destination.

How do we move the peak of our footprint curve to the left?  One way is through good transit.  NYC started with an above ground railway over 140 years ago, which continued as a great subway system, and expanded from there.  Building good transit that takes up little street space helps encourage development with small land footprints – your commute is shorter the closer you live to a transit stop, so building up allows for more people to live at these valuable locations.  SF and LA had similar histories, except using streetcars and cable cars.   Streetcars aren’t quite as good at concentrating residences as subways, as they stop more frequently.  Seattle and Portland also had streetcar histories, but much of our growth came after streetcars were removed and cars became the standard mode of transportation.  Of course there’s a lot more to land use than transit – for instance we’ll need to allow growth through zoning – but good transit is certainly a strong force in creating a small land footprint. 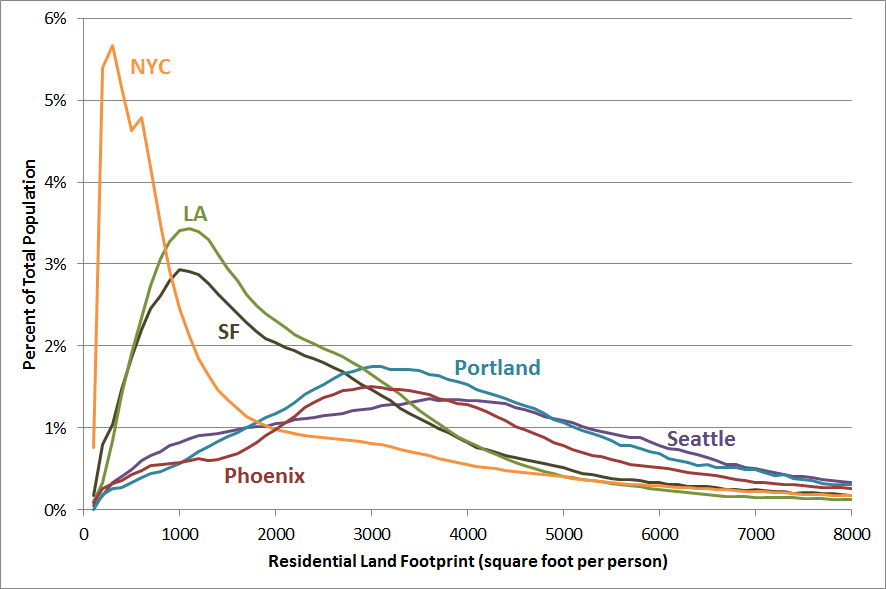 119 Replies to “Land Footprint – Seattle is Not Dense”