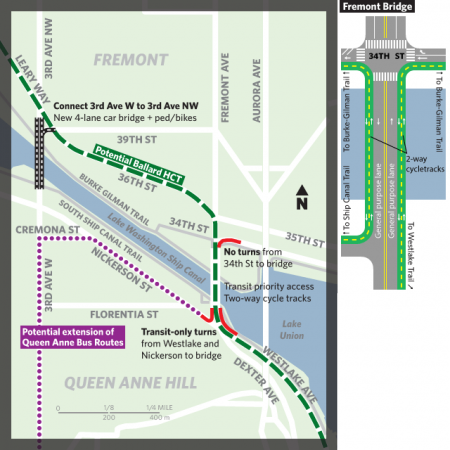 As SDOT and Sound Transit have begun to study the possibilities for improving transit between downtown Seattle and Ballard, the idea of a new Ship Canal crossing in the vicinity of Fremont has lately been discussed extensively but informally in transit circles. That discussion became a little more public on Wednesday, when the Mayor’s office, along with transit, freight and bicycle advocates, held a press conference asking the City Council to fund a proposed study of the idea. The concept has been around for a while, making its most recent public debut in the 2012 update of the Transit Master Plan.

Like several of the capital projects in the TMP, the Ship Canal crossing idea seems rather obviously inspired by our neighbors to the south, in Portland. As part of the the MAX Orange Line, TriMet is currently constructing a crossing of the Willamette river that will carry light rail trains, buses, emergency vehicles, bicycles and pedestrians, and (eventually) streetcars. Perhaps for that reason, most thought and discussion of a crossing (including mine) defaulted to the assumption that it would be a transit, pedestrian and bike crossing, west of the current Fremont Bridge. Then, late last year, someone relayed to me a better idea that, once I heard it, seemed absurdly obvious and considerably superior.

It begins with the quite pedestrian observation that minimizing travel distances is much more important for people walking and biking than any other mode. Asking someone to take a quarter- or half-mile detour in a car just means they would have to watch the world scroll by for an extra minute or two, but asking someone to walk that distance is maybe five to ten minutes of their time. As almost all transit riders are also pedestrians when they’re getting to or from the service, it’s thus much more important for transit to directly access the heart of ridership centers and transfer points than for cars; and similarly for bicyclists.

The chronically congested Fremont Bridge is perfectly located to maximize access to Fremont, and to minimize travel distances between almost any point on the west or south side of Lake Union and any point north or northwest of the lake (without building an extremely long bridge). Perhaps rather than looking to take transit, bikes and pedestrians out of Fremont, we should be looking to prioritize them on the Fremont Bridge, and find a way to get the cars out of Fremont. We could turn the original idea on its head: build a new road bridge west of Fremont (complete with excellent bike and pedestrian infrastructure) and reconfigure the Fremont Bridge to primarily move people, not cars.

The map and diagram above, by Oran, illustrate one possible implementation of this idea. After the jump, I’ll discuss all the components in detail.

Under this proposal, transit speed and reliability through Fremont would significantly improve, with congestion-related delays likely eliminated; transit riders would retain access to the heart of the neighborhood. For bicyclists, the Fremont Bridge would become almost like a four-leaf clover interchange, where it would be possible to connect between the Burke-Gilman, Ship Canal and Westlake trails, at their easternmost nearby point, without interacting with traffic in the roadway, or pedestrians on the sidewalk. These are not things that can be done with just a new transit/bike/pedestrian bridge further west.

Drivers from the south headed to Ballard would not be inconvenienced by using the new bridge; to Wallingford, they could use the Aurora Bridge; and to Fremont they could approach via Dexter, or via Westlake then backtrack down Leary. The total number of general purpose lanes across the Ship Canal would increase, and the new bridge could be built with steeper approaches and an arched profile that provides more water clearance, which would mean fewer openings. The new bridge would undoubtedly be a highway purpose, as defined in the state constitution, and thus could be paid for with gas tax money. That it could straightforwardly be claimed to benefit drivers as well at other modes potentially broadens its political support.

That’s the case for what I think is a better Ship Canal crossing. What do readers think? What have I missed?

To avoid being sidetracked into tangentially-related arguments about the TMP (streetcar vs. subway vs. bus; Interbay vs. Westlake; etc.), let’s keep the discussion focused on the following question: if we’re going to build an at-grade (drawbridge) Ship Canal crossing, where should it be, and what should run on it?