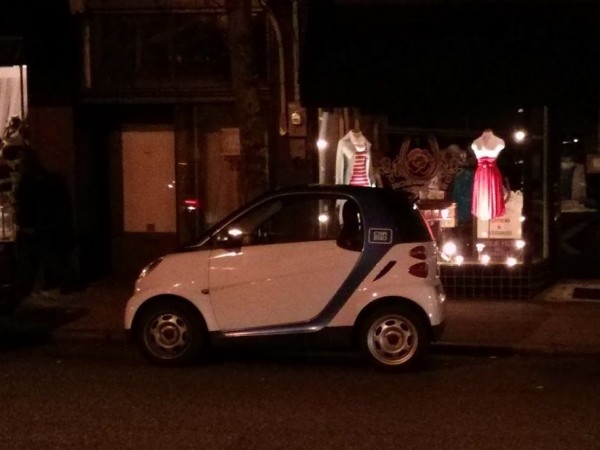 I talked on the phone to Car2Go CEO Nick Cole a couple of weeks ago, to follow up on our last interview, and relay some of your questions; apologies for the delay in getting this published. I did ask if car2go could share heat maps, or some other graphic of Seattle’s demand, but they declined. They did, however, point out a video from South By Southwest showing car2go usage in Austin one weekend, which while not official, is apparently accurate.

Bruce: Everyone seems to agree the car2go refueling process is terrible for users. Do you plan to make any changes to it?

Nick: Refueling is a necessary evil, of course. Unlike competitors, car2go only requests (not requires) that drivers refill the car below a certain fuel level, so most users will be able to avoid it if they wish. Essentially, we crowdsource refueling: for example, there are apps [e.g. free2go] which show users cars that are eligible for the refueling bonus; this is much cheaper for us than paying someone to go out and refill cars. The current bonus seems to provide an adequate incentive to keep the cars fueled, so there are no plans to change it.

One common request is for the option to buy down the insurance deductible; $1,000 is more liability than many people would like to carry. For example, ZipCar allows users to do this on a monthly or per-trip basis. Are you guys planning to offer this?

Yes, this is something we want to offer. We are talking to our insurance company now, and we hope to offer something by the end of the year.

Another is for the ability to drive in other countries, e.g. I’d like to be able to drive in Vancouver or London with my Seattle membership. Is this something you could offer?

Again, this is another thing we want to offer, and we’re working with our legal team to make it happen. car2go is a global company, and we want car2go to be globally seamless. Keep in mind, though, It’s quite a lot of work: we have to solve more than just the US-Canada problem, we also have to solve Germany-UK, Canada-France, Austria-US, etc.

ZipCar automates toll collection on SR-520 (and other roads) using WSDOT’s Good2Go system, whereas car2go processes them manually, and tacks on a $5 processing fee. This means an extra $10 for a round-trip to (say) Kirkland on car2go versus ZipCar, which singlehandedly makes car2go uncompetitive. More widespread tolling, e.g. on SR-99, is in our future. Do you guys have any plans to adopt Good2Go tolling?

We definitely want to make using car2go a more seamless experience, but we have no plans in the short term to adopt Good2Go.

For a tech-savvy company, your website is surprisingly clunky; e.g. it frequently forgets which city I live in. Are you guys fixing this?

We’re well aware there are ways it could be improved, and we’re always looking for ways to do so.

A couple of weeks ago, car2go launched a partnership with a private parking lot operator at Austin-Bergstrom International airport, providing off-street parking and an airport shuttle service for a $5 surcharge. How is that working out, and do you see it having applicability to other cities?

It’s been very well used, almost from the minute it launched, and we’re certainly prepared to look at similar things in other cities. One thing to keep in mind is that Austin’s airport, unlike many others, is very close to the city, so it was only a very small extension of the home area to put cars at that lot. Proximity would be a factor if we were to consider this somewhere else.

Virtually every north-south street in downtown Seattle has a peak-period parking restriction, so finding acceptable parking for a car2go downtown can be almost impossible. Are you aware of this issue, and if so, what might you do about it?

We’re not aware that this is a problem, but if it is, there are a couple of possible solutions. One, which we can implement quite easily, is renting spaces in private lots downtown. Another is doing as we’ve done in Vancouver’s downtown area: arranging for reserved some on-street spaces just for car2go, but prohibiting car2go parking on other streets.

Any general comments on how your launch in Seattle has gone? Are you having any particular problems?

Seattle’s been a great city for us; we’ve had no problems, in fact we consider this to have been a model launch. We’ve been pleasantly surprised to be able to expand after only four months, and the support of the Seattle City Council has been refreshing: some cities are reluctant to expand even when our data shows the existing fleet is well-used. Perhaps the most impressive thing: utilization of cars has remained very high even after the recent influx of new cars.

Thanks to the car2go folks for sitting down with me again.

25 Replies to “More Answers from Car2Go”