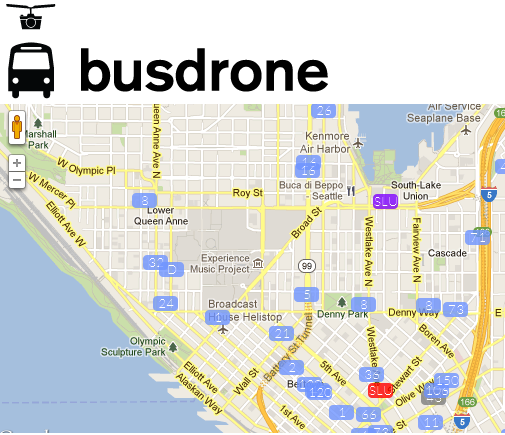 In the years since OneBusAway took over the realtime arrival market, Busview, the old UW website that provides recent bus locations rather than expected arrival times, has been quietly doing its job, largely forgotten.

That may change thanks to Andrew Filer,* a local programmer who (among other things) runs a site that indexes trademarks . Filer has updated the Busview concept with a new website named busdrone. “The biggest problem [with busview] is that it’s a Java applet, and I think a large percentage of people just don’t have the ability to run applets anymore,” Filer explained. “Mapping has also just gotten a lot nicer and more flexible since Busview’s mapping code was written, and so I think Google Maps sets the bar fairly high for anything that uses custom maps.”

After what Filer estimated to be about 30 hours of work, busdrone launched last Sunday. “Eric [Butler] just suggested it one day, and it’s actually kind of a fun problem to begin with, because it was like, ‘how do I figure out this busview software,’ which was written in the late 90s, I think. I  basically ended up decompiling Java and figuring fdall that stuff out and it was a good challenge, but then it was like, ‘ah, it’s kind of useful,’ so I’m still working on it!”

The color code is not yet clearly explained on the site. Most buses are blue; when there hasn’t been a position report for 10 minutes, it turns gray. The SLU streetcar is Black, Red, and Purple, corresponding to the actual colors of those streetcars. Link, of course, has no public real-time data.

At the moment, it’s hard to tell at a glance which direction the bus icon is moving. Filer has the heading information and should have the indicator running within a week or so. Another problem is that the icons don’t show up on some mobile browsers, including my Android phone. In the next “week or two,” Filer expects to tweak the site to work on more browsers. A beta version currently incorporates the OneBusAway feed, which includes Pierce and Intercity Transit, and that should also be stable in the next week or so.

Currently, when you click on an icon it shows all possible paths that bus route could take. Filer can use the OneBusAway data to instead display the path relevant to that trip. He is also toying with the idea of connecting it to webcam feeds so that you can physically see the bus on its way.

Filer says that Butler (an STB alum)  is interested in making a mobile app, though he’s not sure when that might be ready.

Busdrone is to onebusaway as a system map is to Trip Planner. One gives you a single answer, digested to what you exactly need to know. Map-based displays let you see all the options at one time. The two approaches complement each other, so it’s good that busview is getting a modern update.

*Andrew also helped out a bit with the STB back end a few years ago.