Lots of interesting things have been announced at Google I/O this week, including a major update to Google Maps, a Google product that’s familiar to almost everyone, and used by many on a daily basis. Most of the news coverage has revolved around visual, social or privacy aspects of the Maps experience, but I want to talk about a major upgrade to the transit functionality of Maps.*

With the new version of Google Maps, when you ask for directions between two points, rather than getting an itinerary that minimizes travel time for a handful of particular departure or arrival times (as you do today), you’ll be offered an itinerary that gets you between those points, as frequently as possible, for as much of the day as possible.

To put it in transit nerd terms, Maps will evaluate all the possible ways to get between two points to figure out the effective all-day frequency and span of service (accounting for connections between services of different frequency), and show you itineraries which prioritize those qualities over a naive minimization of scheduled travel time. It will still be possible to look at departures or arrivals at specific times, but the general guidebook itineraries will be the first thing users see.

The screenshot at the top, taken from the public preview, shows an example of this. To travel on transit from the PacMed building to downtown Fremont, take bus 36 and then transfer to 26, 28 or 40 in Pioneer Square. This itinerary works at least every 15 minutes from 6AM to 11PM, every day; within those time periods, it’s a general solution to the problem of getting between those two points. An alternative route, using the 5, 16 or 26X to get off at 38th & Bridge Way and walk down the hill is also available.

In both cases, note that even though a single route determines the baseline daytime frequency for the connection, Maps notices that other routes also serve an identical pair of stops origin destination stops, so if one of them comes first, you should take it.

After the jump, another example. 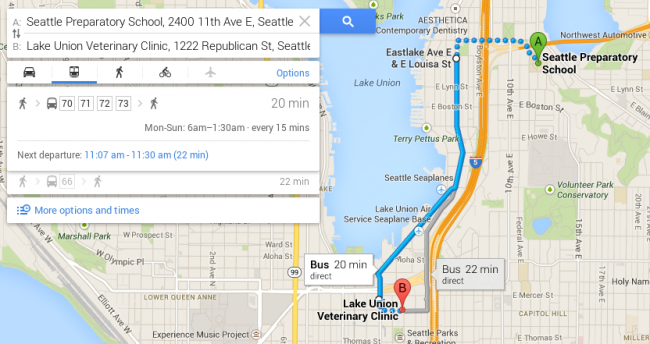 There are three ways you could get between these two places: walk to Eastlake and take the 70-series buses, or the 66, or wait for the 25, which makes this trip almost door to door. The 70-series runs every 15 minutes all day and night, the 66 is every 30 minutes, and the 25 is every 60 minutes. Nobody capable of walking is going to bother waiting up to an hour for the 25, and the results reflect that, directing you towards the most frequent service, rather than the nominally fastest service, which would be the 25 at 19 minutes. If you really do want to see the door-to-door trips, you can click the “More options and times” links and find them.

This new transit routing system more closely reflects the way the vast majority of people actually use transit, prioritizing frequency and span of service on generally-useful routes over infrequent one-seat rides that just happen to provide doorstep service. Its works best, of course, in transit systems full of truly high-frequency, reliable all-day routes, but to the extent that we have such service here, the same ideas apply. Frequency is freedom, and the most commonly-used private sector mapping tool increasingly reflects that. There are still some kinks to iron out of the new routing engine**, but this is a huge stop forward to more comprehensible transit.

The new Maps is being rolled out gradually; sign up here to get on the waiting list. I think you’ll love the new maps.

* Disclaimer: I work at Google, but in a completely unrelated area, and all this information is based on the public preview of the new Maps, not inside knowledge. Please don’t ask me questions about unreleased Google products or features, I can’t answer them.

** For example, the 7 is prioritized over Link for Rainier Valley trips because Link’s all-day frequency is considered to be 20 minutes, due to the post-9pm single-tracking that’s currently happening for repair work. The 7 runs every 15 minutes until much later, and is thus considered a superior service by the routing engine, even though during most of the day it’s is actually an inferior service for most trips.