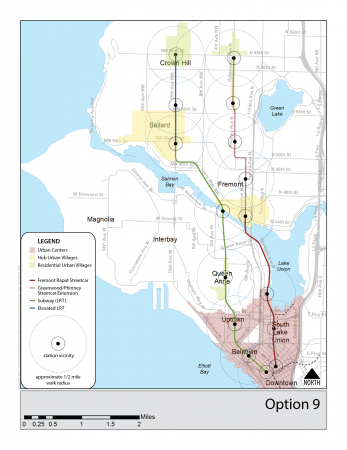 Last week, Sound Transit and the City of Seattle released eight options for rail from downtown to Ballard. When they presented these options, they said “mix and match” – don’t just take these as complete lines, consider each segment of each line and piece together what you’d really like to see. I wrote up a complex explanation of what a best case scenario might look like, but I got feedback that we really need a map.

Fortunately, an anonymous designer agreed to help, and voila – Option 9. The great thing about this map is that it also includes the study area’s urban centers and urban villages. These are where growth is expected to go in the next decades, so they’re a good indicator of what we should be connecting. So this map combines what we could do here, in Seattle, with what Sound Transit could build, to serve everything.

At the Ballard farmers market this Sunday, I got almost universal positive feedback about this map (and a huge sunburn). Let’s cover the frequently asked questions I got there:

Why not Interbay? – Interbay would be just fine. While it’s ideal to serve urban villages first, Interbay wouldn’t be a terrible fallback. But we shouldn’t start there – if we ask for Queen Anne, and help organize people in Queen Anne to help, we’d tap an area of strong transit support and ridership, and we’d make sure Sound Transit is asking the legislature for as much authority as they possibly can. We could need it later.

Why two Fremont stops? – As I noted in Thursday’s piece, a station under the canal could serve Fremont’s growth westward over the next century. It would also serve SPU, a major institution that’s likely to grow, and open up the opportunity for the car-centric business area on the south side of the Canal to become walkable and urban. There’s no way to get out of stopping in Fremont for a rapid streetcar to Phinney/Greenwood, so you end up with a major stop and a little stop. I think this makes sense. One of the project staff pointed out to me at the Thursday open house that in combined housing and employment, Fremont’s expected to grow as much as Ballard, and maybe even a little more, in the 2035 Comprehensive Plan.

What about cross-town? – That study starts soon, and I expect to recommend a line starting in West Ballard (it’s not just Fremont that should have more than one stop) and running to UW. That’s just outside the scope of this study – I totally support it! West Seattle starts soon as well.

How do we get there? – This is the exciting part. There will be a lot of opportunities to help build a better city.

Help us ratchet the city forward in great transit access. Go to Sound Transit’s Ballard study page and toward the end, in the Additional Questions section, comment in favor of a tunneled ship canal crossing, a tunnel downtown, and most importantly, tell them you want Option 9.