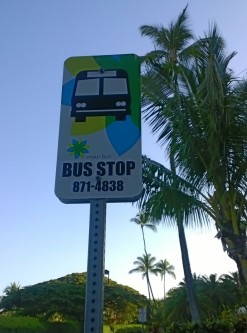 Maui is a small island and it’s bus system is likewise small. A service of County of Maui, it is operated by Roberts Hawaii.  There are basically two separate networks, a peak only commuter network and an all day network.

Of the thirteen all day routes, ten are hourly, two are every ninety minutes, and one is hourly in the morning and half hourly from 2:30 to 6:30pm.  The buses are new, clean, and have bike racks.  Fares are $2, cash only.  However since you only drop the bills into a clear plastic box and there are no transfers or change, boarding is quick.  All day passes are $4, monthly passes  are $45 and both are purchased from the driver.

You can’t really use the all-day to get around entire island as each route is only a few miles long and transfers are not timed.  For example one trip that ended up being less than thirty minutes by car would have taken three and half hours by bus and would have required one forty minute transfer wait and a one hour transfer wait.  Both the origin and destination were on the same road and less than twenty miles apart.

The commuter system covers almost the same area but combines all the short routes into four longer distance routes, radiating out from from the North/Central part of the island, mostly through the Wailuku/Kahului area.  Stops are reduced by about half.  Three routes have only one run each peak period, with one having four round trips.

As I only rode two all-day routes and none of the commuter routes I have to give Maui an Incomplete.  We were able to get by just fine without a car, but it required picking a hotel near our friends and close to services, walking most places, and relying on friends for the trip where we needed to go further than a few miles from our place.